Blood, blood glorious blood, nothing quite like it for cooling the mud.

Long time no blog, I’ve been distracted by WWII stuff this time, perhaps I should start a sister blog for my historical stuff. Anyway inspired by Nico and his truly amazing site, really you must visit; I thought I’d post some old pics of more of my Chaos collection. Again old PJs so please don’t judge too harshly they are a shambles compared to Nicos master pieces but work well enough on the table. Perhaps one day I shall revisit them with the brushes but currently too many other projects await on the lead pile.

There are Beastmen, chaos dwarf crossbows and war machines, centaurs and more thugs knocking about somewhere but that’s another post…
Posted by Erny at 04:55 1 comment:

So I've be preparing stuff for a second round of LL and actually playing, ergo no posts for a while. To keep things ticking over here are a few shots of my Slaaneshi stuff old paints but good record here:

Not sure why there are no pics of my Daemonette units or mounted knights. The fiends, champions and thugs are still sadly in the lead pile.
Posted by Erny at 05:44 3 comments:

OK just discovered this web site by Johnathan Bingham. Awesome stuff, I recognise some of the work from OSRIC. Particularly love the dragon and adventurers.

Any way I just love B&W illustrations, try my hand at it myself a little so perhaps if I get the courage up I'll post some of my own stuff. I think I'm going to have to link to other great BW site on here as well as the other things I mentioned in my first post. Obviously a link to Russ Nicholson goes without saying and a favorite at the moment is Andy "ATOM" Taylor.  More will be added. 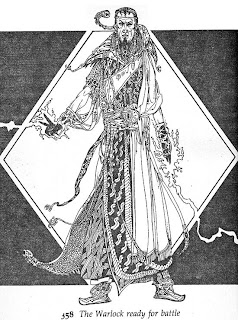 Perhaps at some point I need to muse on why B&W illustrations seam to rock so much, they do a different job to coloured pieces and you know what, I almost prefer them.
Posted by Erny at 05:10 1 comment:

I’m 34 so I’m roughly as old as the whole RPG hobby. This means that Old School to me is Fighting Fantasy, including Dungeoner (which came out as late as 1989), WHFR, WHFB 3rd edition, Rouge Trader and the games I cut my RPG teeth on MERP and AD&D. Until recently I had never played DnD, I remember looking at the lovely red box but being advised by older friends that it was a big con. That I’d only have to splash out for the next box set up and I’d be better off buying a more complete game. This led me to getting WHFR and the rest is history.
However I have discovered like many all over the world the joys of OSRIC which ultimate led me to Labyrinth Lord and the sheer joy of my ten year old self finally getting my hands on this game. Sure I can and have picked up the original DnD basic set but only being tainted by nostalgia for the original illustration and not the content has left me free to consider LL a better book. It’s great with the AEC as well but that’s another post.
Anyway I’d e-bayed myself up some old adventures and with no patience for my two sons to grow old enough to play, I convinced some gaming mates to give it a go. So one Friday night armed with a night pass from the wife I went for curry and beers followed by a bit of Labyrinth Lording. I had bought along just the basic book, Module B2 : A Keep on the Boarderlands to play and B4: The Lost City just for the ready made adventures packs included to save time rolling the characters.
I firmly imposed the rule of 3d6 each stat no re-rolls, with much glee to me they all moaned about the imposition. We ended up with an Elf called Leg-o-Lamb with high Int and HP of 8, a Dwarf called Two (being the 2nd Dwarf my friend had played) with average to poor stats and a Cleric with almost the worst stat line ever seen. The Clerics player took one look at the weak, stupid character and called him Father Ted, at least the law of averages would mean an OK roll for hit points. Father Ted has 1 hit point, Two’s player in particular thought this was very funny.
Long story short Father Ted hired some help and they set off to the caverns. They waltzed up to the nearest cave opening and had a fight with some Gobbos, Father Ted survived and Two died. Awesome. Two’s player took over one of the hired help and died.He managed to stay alive as the other hired help. Inside the Cavern the Elf remembered his sleep spell just in time to save the party and they escaped their initial foray with 250 GC in Ogre bribes and only one character death. We all had a laugh and I’ll be forcing them to play again soon.

After waiting some 20-25 years to play basic DnD was the wait worth it? Yep, simple rules, great fun with no pretentions. We’ll be playing again soon as I get another pass.
Posted by Erny at 08:06 No comments:


So I've had this blog since 2009 and here is my first post. Just to show how glacially slow everything I do is. As always I have big plans for 2011 but with two kids and no time I figure I can at least write a sort of blog about my interpretation of old School miniatures and games if nothing else.

I like to keep my collection contemporary to 3rd edition WFB or earlier. I break this rule often and modern ranges like Otherworld miniatures make their way into my collection. In the next few months I hope to post ongoing work on a scenario that I've played a few times but never solely with the figures available at the time I bought it. Also some PJs of the first figures off my growing mountain of Otherworld minis. If time permits I intend to play some Labyrinth Lord, DnD, I had a few hours spent in the caverns of chaos with some old friends recently and it was a blast. Lastly I hope to document the collection I have already painted and perhaps revisit some with my brushes, lord knows they need it. Oh and I guess some of my historical stuff may creep in too.

Here is a picture of the last thing I painted to keep your/my interest..