The Battle of Manling Fields part 4.

Imperiled on the right most flank the numerically diminished thunderers watched a large body of ratmen approach. The chattering calls from the foul skaven deriding the good-dwarves families, culture and dwafhood filled the arquebus-dwarves with contempt and each resigned to take as many as they could with them to their graves.

A staccato sound from whirling blades filled the air and a great down draft sent beards swirling as though in a great wind. With a loud whooshing a torrent of super heated steam shoot out from the sky deep into the skaven ranks. The smell of foul cooked meat assailed the waiting  thunderers as ranks of skaven were scalded to their dooms. Grinning with satisfaction and relief the dwarves shot their fire arms at close range into the screaming mass. It was too much for the surviving rodents who turned tail and fled the musks of fear and panic hanging heavy in the air mixing with the acrid tang of black powder and the nauseating smell of cooked rat flesh.

Hats were thrown into the air as the sooty faced dwarves cheered their deliverance. The gyrocopter pilot rocked his craft and saluted in acknowledgement  before flying off with new found purpose.

In the center Lord Brouhaha watched with mounting pleasure as he saw his right flank hold and then repel the drawing danger. "Yes, yes!" he cried, hope sprang anew and opportunities seamed to present themselves. Small Daniels mad dash for safety had left the hulking rat ogres perilously exposed and with several blasts from his musicians horn the clansmen were ordered to charge.

With a great thud the diminutive heroes crashed into the great bones and sinew of the rat ogres, axes bit, claws swiped and although pushed back the Clan Moulder giants held.

To the left the troll slayers proceeded to work themselves up into a frenzy, madly striding towards  a second group of rat ogres.

The Rat warlords unit surged forward sensing that a decisive attack was needed now, or all would be lost. Warpstone shot rang out over his head as further brave dwarven warriors fell to the evil firearms. A spell aimed at breaking the legs of the great Lord Brouhaha wound it's way toward the Dwarven Lord. With the grim determination only found in the sons of stone and steel Brouhaha shook off the effects and would not allow his body to be dictated to by mere arcane power. "Fire," he shouted and crossbows and bolt throwers launched their missiles at the rat swarm. The in a surge of steam powered might the gyrocopter flew, low to the ground in a fast daring drive. Steam erupted once more from the machine, engulfing the main swarm in the deadly surge of scalding death. The combined effect was once more a moral breaking blow. The warlords champion fell along with many other vermin souls even as there litter brothers fled.

With little hope for survival much less victory what rats remained also dissipated away. On these muddy fields the tide had been turned, Lord Brouhaha's hold was safe once more. At least  for several seasons.
Posted by Erny at 08:16 10 comments: 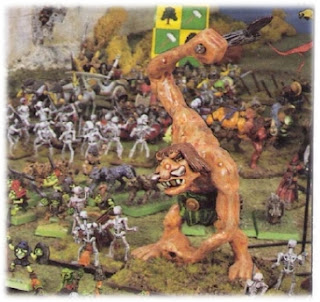 I love WHFB 3rd ed, I love obscure citadel miniatures from the 80’s, I love Giants. So imagine how cool it was to see this post by Thantsants. I’ve been trying to collect this blighter for ages, the closest I’d got was the right head and weapon but wrong body, so I was even more pleased to see Thantsants had a spare body of the type I needed. After a very agreeable trade I’ve been able to acquire the Citadel Fighting Fantasy 54mm Ogre body to go with the head and weapon I already owned to make the classic WHFB 3rd ed orange Giant. 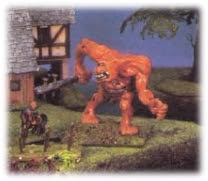 Also as originally each of the FF 54mm miniatures came with a choice of head and weapon I still had enough parts to make the second even more orange giant, well almost the body and weapon are right the head wrong. It will have to do.

I’ve begun the clean up, I used to used heated pins to clean up mould lines on 20mm soft plastic figures and tried the same with these brutes. The pin was to little and I ended up heating a knife blade to do the job. I don’t think I’ll enter in to the great Giant race on the offing but will steadily work away at these two for some mega game in the hazy future.

For those interested in packaging my initial ogre came in a mint blister pack which I preserved as best I could!

The late 80's saw a large number of all lead and some few plastic boxed sets released by Games Workshop and Citadel. After reading this post on the BLOOD Forum, I thought it would be a nice idea to post up some pictures of my own boxed sets. They were the late 80's to me, or at least all I dreamt of (other than girls).

There used to be the occasional competition with the winner pictured in the midst of huge piles of boxed sets I always wanted to be that winner. Now I'm a little of the way there, this pile of boxed sets isn't all of them but all I could find on a spare morning at home.

Here is some close ups of one set in particular, the Skeleton army has some great pictures of other boxed sets on it's sides.

I'll post some more soon and looking at it I need better shots of the Skeleton army box, ipad sometimes doesn't cut it as a camera.
Posted by Erny at 08:30 8 comments:

Everyone wants shield designs and hand painting 80’s designs for your whole units can be a bit of a chore. Games Workshop recognised this and in 1987 brought out Arcane Armorials a set of water slide transfers for shields and banners. With there vibrant primary colours they are perhaps an acquired taste but highly evocative of the period as shown here.

So let’s say you’ve dug out your Arcane Armorials, or scored some on ebay like Orlygg? Chances are time has not been good to them, the colours have faded, the chances of the transfer working are slim. It is still possible for the owner of these delightful designs to get some modelling use out of them. The first step is obviously to scan them into your computer, this is exactly what Orlygg did with his, to then print out and attach with PVA glue.
These look great and is using the never before used transfers for their original purpose in a way that mitigates for their age.

I’d like to explain how I got the best out of my own by using the Gimp and a different method of attachment. The first stage is to scan as said the next is to defeat the detrimental effects of time by playing with your colour balances. I also took the opportunity to add a little high lighting that sadly didn’t come out so well in the finished print. Next time I’ll over egg the pudding. These are then printed onto sticky paper.

An added bonus is you can have a few of the same design on one sheet. I think in the future I'll be drawing my own designs correctly sized for us all to use IP free!

Cutting out is simple with a pair of scissors, and attaching the design child’s play.  Though tacking the backing off can be a bit tricky!

So long as do not alter the size of  your image and you print your resulting jpg out at actual size with no margins they come out the same size they were scanned in at. A perfect fit, though I think my black ink is running out, still the greenish hue looks good!

I think you’ll agree the ones attached here to some of Rudlug’s finest look identical to the originals, all for 10 minutes work.
Posted by Erny at 03:47 2 comments: