With the waters of the Fern only just beginning to swelling with the cold runoff of the thaw Lord Bi Lloddie had led his Sylvan forces back to the Vale of Fern. It still felt cold to the bone and though the Winter watch they replaced had waited out the coldest and darkest months on guard he still felt resentful towards their retiring, going back as they were to enjoy the festivals of fertility and light. But it was a new season and Spring Watch was here to witness and record all that befell this crucial if usually quiet part of the Wood Kings realm.  No he must not grumble, in this world so often painted in gritty shades of gray Lloddie had always prided himself that he was one of the Goodies.


He rode closer to the master illusionist Sim O‘Nking, “You have scryed the whole area?”
“And more my lord”, the wizard replied, “I have cleverly disguised magic eyes covering all approaches to the Vale all the way from the Ford at Capri to the lonely Barrow. No beast of land or air can enter the Vale without my knowledge. See here look deep into the crystal ball of Mo Niter.” The great lord peered deeply into the shifting green mists of Sim’s crystal ball, at first he could make out only a fierce blizzard, he hoped the snow would prove to be the last remnants of Winter and began to turn to make plans for the coming storm.  “Wait sir I apologise, Interference only, I’ll just adjust the settings.” Sim passed his hand over the crystal several times before allowing his liege Lord to look into Mo Niter once more.

“Good I see the Ford of Capri remains undisturbed, the people of Brent Wood can rest easy still.”  The vision shifted from view point to view point roughly following the path of the Fern. He smiled as he viewed himself, his band of wood riders and his hunting pack in the image and marvelled as it moved over the rest of his host. He could clearly make out Xispa Kerm and his Kinband, Sim’s fellow mage Mikael Astrachan and Kat Umbell and her bows followed by a troop of war dancers. Finally his eyes rested on his glade guard scouts known simply as The Viewers.

“All is good with the host”, Lloddie proclaimed,” with this Mo Niter and with The Viewers telling us all that they see Spring Watch will really have a good idea of what is going on in this country.” Watching still, the vision displayed in Mo Niter shifted once more from glade to meadow to village until finally coming to rest at the Lonely Barrow.  In ancient times Men had settled this area in an age when the Woodland Elves had lived in great cities a time known even today as the Evil Time. Because of their necromantic practices the vile nameless Men had been forced out by a grand alliance of good a thousand years ago.  The Barrow here was only of a lesser lord of the old people and was not widely known to the world outside the Woodland realm. Still it was rumoured that a great artefact lay somewhere in the barrow, one that must not be disturbed and so the Seasons Watches guarded this area with great diligence. “Something is wrong with your crystal Mage, the Barrow looks like it is under excavation.”

A robed figure walked briskly between the earthworks covering the barrow. “This whole operation is bust!” the necromancer grumbled. He knew full well he was in Wood Elf territory and could almost feel a sharp steel arrow head punching in between his shoulder blades. He wasn’t afraid of death. The great necromancers of old fascinated him, he had studied there ways for so long. Had he not practiced their arts, taking a terrible physical toll for his endeavours? When he still lived in the cities of Men he had gone completely bald overnight gaining forever the cursed moniker, “Bald Rick”. He had sacrificed so much for the study of death, so no, death held no fear for him except perhaps his own. And that is why he was so keen to rush this dig, they had barely been here a day and he was already prepared to say the whole thing was a Bust Op. His Lord and Master the ancient Vampire Scholar Lord Micka Ston told him that in his youth before he had travelled down form Kislev and been gifted the blood gift he had seen this very barrow mentioned in his masters Tome. This was the resting place of a powerful Necromantic artefact and Lord Micka would have it.  However not one single artefact had been uncovered.

Though the ancient minions worked tirelessly they had not the imagination to see this was all going nowhere. The grinning head of Philhard Ding the skeletal champion raised itself from out of the earth. “What do you want simpleton?” the necromancer sneered but the hollow eyes seamed to be staring through him. Looking behind himself Bald Rick saw his Lord approaching. He addressed his lord and master, ”Master Mika I must tell you we have found nothing, the whole Op is Bust. And….” The necromancer paused reluctant to convey his inner thoughts to his master. The Vampire raised a hairless eyebrow, ”Yes my disciple?” It was useless, Mika already new his doubts, he was allowed few secrets from his master, “Lord I worry about the Woodland Elves, I fear, for the meagre rewards we have gained we have bitten off more than we can chew.” The Vampire began to laugh, “Nonsense disciple, there are many, chewier, barrows than this, we will manage quite well even if the fey guardians arrive.” Bald Rick bowed his head, he disagreed with his master but from a sense of preservation did not want to show it. Secretly inside he said to himself, ”Yes there are many barrows but I have doubts that they are chewier than the Bust Op at Barrow in Fern is.”

Please do return dear friend when we shall see what happens when Spring Watch take on the Evil Time Team head to head. If you can stand the puns that is.

I’m back after months away, blame work and the kids not laziness, never laziness. And I have a simple conversion for you. 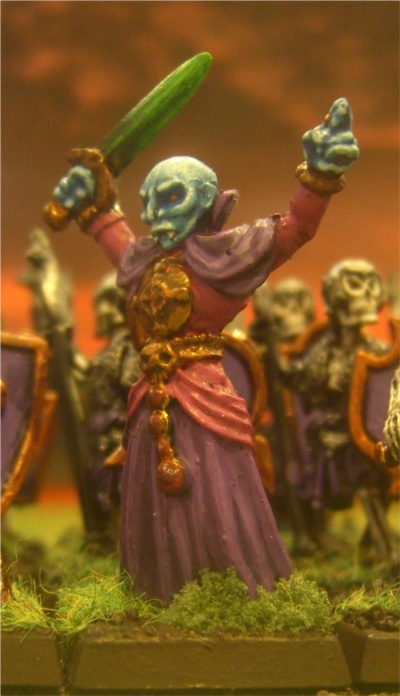 OK so these Vamps are pretty common but I’m a sucker (get it) for anything marauder and I’ve had an itch to give him the sword from the marauder Necromancer for years. A very simple job but well worth it to my mind. Here he is leading a unit of skeleton spears in a 3rd ed battle report I hope to post soon.
Posted by Erny at 07:45 3 comments: