So what’s this? An article about uber tactics and list design for 3rd ed orcs? Well, no, for one thing I think the choice of troops you have in your army should be down to you, what do you like the look of, story behind or simply in your collection. Having said that you can’t go wrong taking boys, lots of boys. I also don’t think that 3rd leans itself to the concept of good or bad builds. As to tactics you won’t find any advice on tricks and cleaver ploys to use the rules to your advantage. No the following is more about being a good opponent and giving a good game. It is about how to wield the amorphous bludgeon that is an orc horde in a solid orc-like manner. It is the sound advice an Orc warlord would bestow on the strongest and brightest of his offspring.

With his army arrayed across the vale, boys drinking and bragging, preparing for battle Ashcan looked down at the young orcling. Ashcan believed he was probably from the second whelping with that buxom Sawtooth female the one with the large… Anyway the little runt’s observations showed promise, at the very least he’d noticed you have to keep the gobs away from the boys if you don’t want the jealous little snots stabbing your boys in the back. He booted Stinky Fred in his boney goblin posterior. “Getchur arse dan der an tell them Blood skull boys ta come in ta da centa more, I don’t care if theys want the ale frum da Inn day are gett’n outta posishun.”

The first and perhaps the most important part of taking your army to battle is how you deploy. Mistakes made here last for the whole battle and can often be the difference between winning and losing or to give it a less win at all costs spin, the difference between giving your opponent a good game or a walk in the park.

So that should be the very first subject we talk about shouldn’t it. Sort of. We cannot consider deployment before first understanding the major limitation of the goblinoid army, animosity. Understanding how animosity works is the key to ensuring your army does more or less what you ask it to. A good orc general would understand these principals too so there is a narrative, RPG element to the following comment and advice.

Animosity works with a die roll the lower the better, above a certain number (look it up in the book, I can’t give exact rules out here now can I) things get interesting. The amount rolled on the dice is increased by certain modifiers and importantly decreased by an leaders LD bonus.

So the golden rules for not getting completely nerfed by animosity are:

1  )      Include leaders with at least a +1 Ld bonus wherever possible.
2  )      Ensure if possible all troops can see the enemy.
3  )      Try to ensure troops ahead of other troops are not directly in front.
4  )      Try to ensure troops of different races are not too close to each other or have leaders with very good LD bonuses.
5  )      If they are in your army and you can work it usefully into your deployment use black orcs to dampen any possible animosity.

Next we should look at what assets we have, however you build your army you are going to have a solid infantry base, a regular orc is better than a human for the same points and even a spear-gobo is deadly if backed up by enough of his tribe.  You will probably have a strong selection of peripheral troops too, decent skirmishers if used in large numbers, fast cavalry and possibly even good  enough heavy cavalry. You also have numbers, orcs get a great deal points wise because of animosity which as we now know need not hinder the orc general with some brains in his noggin.

Now with is all in mind we can consider how an Orc general may deploy his forces to ensure victory. The obvious tactic that springs to mind is the double envelopment quite possible to pull off with only boys in your army! Used by Hannibal at Cannae this is often classically pulled off with a force smaller than your opponent. With your boys however there is a very good chance you will outnumber your opponent so the double envelopment employed will look more like the , “buffalo horn”, envelopment of the  Zulus. Use your numbers to stretch your opponent to ridiculous weakness or allow him to concentrate and bring your flanks round whilst initially refusing your centre.

If you prefer to go cavalry heavy perhaps a leaf out of old Alexander’s book is called for, the Hammer and anvil is I guess a single envelopment using your cavalry to get round the enemies back whilst pinning with your boys, make sure you have superiority of numbers in cavalry even if not quality.

These two tactics will serve you well and the one can morph into the other as need dictates. But what if the other army is also a horde and can adequately defend his flanks and support his centre with numbers.  I’m looking at you Skaven and Brettonians. Well here again we have an advantage, animosity. Animosity is a major headache if you allow it to happen so good quality troops get a major point reduction. If we don’t allow animosity to ruin our day we end up with a horde of good quality troops. Yes it takes marshaling but what do you think the great brutes of leaders in each unit are for? It will be a straight pitched battle but even here we can take the initiative and attack where we like with confidence. There will be weak spots in any horde army but Orcs, take advantage of that. Most of all though, have fun and crump the stunties.
Posted by Erny at 08:33 10 comments:


Happy first of Orctober, my quest to make October the nations favorite holiday with a celebration of all things green skinned.  Starting this month of Orcy wonder off right I thought it best to start with a giveaway. You see to further the aim of converting the world to my new holiday I’ve dug through my lead pile looking for little gems to give away. It’s all in an effort to get you all celebrating along with me. Just think of me as Father Greenskin dropping down your chimney every Orctober with bundles of goblinoid cheer.

Anyway back to the giveaway, I’ve dug through my lead pile and come up with a bunch of plastic. Amongst many things Orctober is about the unexpected. Here they are, a usable sized unit of Orc boyz made from the ever classic Warhammer regiments uni-pose orcs.

There are twelve here though I will probably be able to dig out at least three more.  You will also notice about half have the original shields which makes them a bit rarer.  I may be able to find more of the said shields in the surplus pile but cannot guarantee anything. Yes they need a bit of a clean up but nothing to strenuous.

So how do you get your mits on these? Easy post an Orc (or Ork I guess) related post on your blog or forum of choice, make it clear it is for Orctober linking back here and make it a bit more meaningful than a couple of lines just to qualify for the draw. Post back here a link to your article/post/whatever and I’ll enter you into a draw at the end of the month (so you have until the 25th) first out gets the Orcs if they want them. Reasonable postage paid (i.e. a few quid) otherwise I’ll have to ask for some help on that one.

As motivation here are a couple of shots of my own in a unit looking quite nice even if I do say so myself you'll have to find your own command! 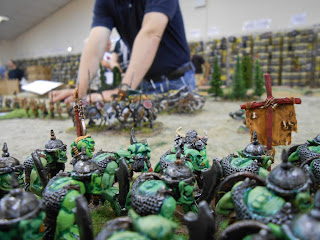 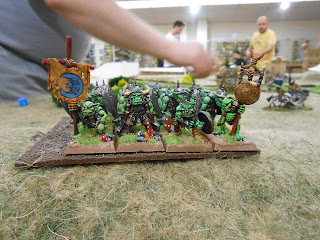