Next year I shall mostly be painting.....

After a lot of thinking and some helpful suggestions I've decided to end the year making a start on my old sea elves. These could form an allied contingent to the 80's empire force I'm working on. Not strictly by the armies book but they will make a nice bunch of merchant guards from a sea elf quarter of some city or other.
They can also venture deep into the interior of a long dreamed of jungle/volcanic island. Also inhabited by Slann, Dark Elves and who knows what other evils, probably some Norse maybe even Nipon or Cathay.

Anyway here is where I start. 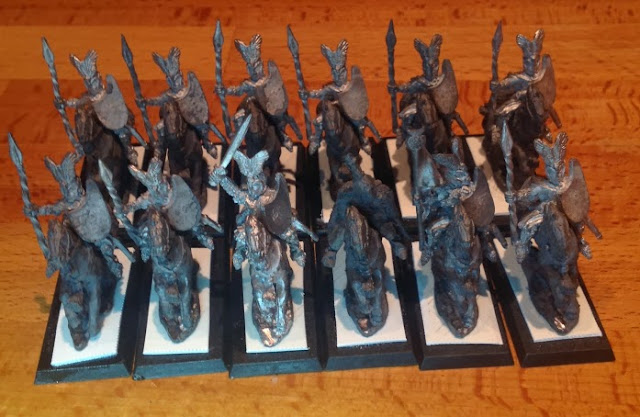 I finally got round to sending Paul his prize for Orctober. Only a few months late but at least it is in time for Christmas. Thanks to all who joined in the Orctober fun, even if I some how managed to contribute very little.

Now pop over to Paul's blog and pester him until he gets the orcs painted.

OK long time no blog but I guess anyone who has followed my blog  for any time will know I blog in bursts. I'm beginning to feel the urge to paint and blog again but the problem is what.

Now I know a great number of you will roll your eyes when I say part of my problem is having too much stuff. And some of you may even volunteer to help me out by taking some of it off my hands (yeah right). But given my collection is well over 20 years worth of yearly growth sometimes I just despair at where to start.

I start prepping a pre 89 only empire army then while looking for the box containing that knight I want to use as it's general I rediscover a couple of  90's Razorbacks. Now I really do want that 2nd ed Ultramarine's army painted up. Ooo look didn't I plan to use that set of RT backpacks to convert up some more chaos renegades.


You get the idea and the whole problem isn't helped by the fantastic deals on ebay at the moment. I can only assume people are spending disposable cash on Christmas because a lot of  good stuff is only attracting a few bids at the moment. I just won serious amounts of boxed nighties high elves for 50 quid. We're talking all three types of cavalry, gryphon, Pegasus, chariots, giant eagle riders, spears and archers plus loads of unopened blisters. I couldn't let that go now could I. I guess I could just stop looking on ebay but it is so easy to get a hobby fix that way than actually decide on a project.

So the actual point of this post I need to make a decision.