A bit ago I promised to post up some close up pictures of some of my 80's citadel boxed sets. GW at the time had a knack of making the box itself something that you wished to posses, so much so that many but not all of my originals bought at the time ended up cut up and displayed on my bedroom wall. Often just the presence of a box pushes the price to the collector up a notch but for the right box I think its worth it.

Here are a couple I haven't seen posted before on other sites(it's beginning to dawn on me that photos that looked in focus in my library don't look so in focus now, I'll replace those that need it soon):


Now this little scenario on the fantasy regiments box set has always intrigued me. If you go by the points on the box you get 305 to 230 points so the cost of the orc unit extra (these points seam to ignore the fact the Skaven has armour on). Its a bit of an advantage to say the least but I think this needs playing out, I wonder if anybody ever did, I certainly haven't over all the years and I can't think why.

I'll set up with just one boxes worth though a couple is also suggested on the box I'm going to keep things simple. The terrain is described adequately I'd like to see if the Dwarf/Elf alliance can pull it out of the bag.
Posted by Erny at 04:57 4 comments:

OK so I think I've teased you all long enough, after the replies here and on the Oldhammer forum I think I'll have to award the warrior to Orlygg for speed of response pretty much leaving nothing for anyone else to name. (I'll get the figure to you when we meet for a game or at salute. Failing that I'll post it if you mail me your address but I'd rather meet up.)

So on to some close ups. Sorry for the focus on these:


First a close up from the center of the table only because it clearly shows the warrior I have three of, a Champion called Sword 9 in the red catalog. Also to be seen are some hounds with my early paint job on and a few sorcerers and thugs.

Now to start more systematically going round the table:

A mix of citadel and marauder minotaurs, I just noticed have quite a few of the same marauder Minotaur, perhaps I should have given one of them away? Anyone got some minotaur swaps I'm all ears. Also some half finished Marauder trolls, actually for my O&G butu fit in here too.

More of them trolls, you can see a citadel fellow there to but I think he fits in well. Also a Lord of Change needing a tail and a strip. Some familiars, two harpies from Bob Olley I have another three somewhere. Finally you can just make out the chaos dwarf swivel gun, I got four of them in a bargain bag from GW Luton in 1994, currently I can't find the fourth gun. The rules are in the same white dwarf as the rules for the CD crossbows.

More on those swivel guns but also the previously mentioned crossbows. These guys give any Khorne army a decent ballistic capability. With good armour and high toughness they just may be able to take on the lord of pleasures dark elf cross bows. Speaking of which I've just realized I haven't even placed out any of the dark elves. Need another table for that though.  There is one whirlwind and one tenderiser, one mortar and one bazooka. Could do with more of these I think. A large unit of CD and the beginnings of a berserker unit.

And that is probably more than enough for now.

So since Orlygg pointed out that it was 25 years since slaves to darkness first darkened our doors I though now would be an opportune moment to take stock of my realms of chaos collection. I spent some time digging through the garage and cellar and promptly came up with several boxes of varying sizes. Anything released specifically for realms of chaos or at least for the chaos and released at the time went on the worktop in the kitchen. Now I know for a fact some of the painted Khorne stuff is missing, taken out of the box to play Mordheim using SoBH probably about a year ago. That’s a little box that needs finding. There are at least 6 trolls missing and I have a sneaking suspicion that another large shoe box of assorted lead is waiting somewhere for me.

Never mind what’s missing, above is a slightly blurry teaser of what I have found. Lets see how much you can identify from the wide shot. I noticed some duplicate Chaos warriors when sorting, if anyone truly amazes me  with there identification skills from this photo I’ll send a duplicate or two off to you.

I’ll start running through some close ups in a few days time.

Wow what a year! Not only did I restart my blog to other peoples actual interest , GM a return to WHFRP online with the full cast of TEW characters but the whole Oldhammer thing has exploded, well a few hundred people out of all the interweb is sort of an explosion. 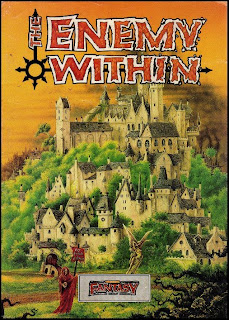 Anyway I certainly didn’t get done half so much as I wished and that includes commitments I made to group endeavors. My postings to the Enemy Within Campaign became briefer and less frequent, a sorry state for a GM. My postings to the DnD (LL actually) game I play in became sporadic, same with my attention to the Blood Forum. My intention to bring out a fanzine fizzled despite others hard work. For all this I’m truly sorry. I’m never one to overly share personal information but with such a stack of people let down, people I now regard as friends, I feel a brief explanation is in order. Don’t get me wrong, I’m fickle and often lack motivation but this year has been quite a year.

Work commitments have increased as have child care commitments for two ever growing and demanding young boys. This is great, a similar situation that many of us share and I wouldn’t change either thing for the world even the three weeks of exams, onwards and upwards as they say. However they do eat into time and energy.

On top of that I lost my last grandparent and last parent this year. Jack was a wonderful Gramp and a veteran of N.Africa, Italy, France and Belgium. He had a great innings, in his mid 90’s but was slowly loosing his faculties. It was no surprise and I can only be pleased he was one of my heroes for so long and that he had loved life. My Dad, my hobby and modelling inspiration, also was no surprise and it was a blessing for him, I’ll say no more than that I’m Stoic about this one. That said bereavement at least where I’m concerned saps the will to do anything other than watch funny TV and buy expensive toys to add to your collection as the sub-conscious adapts to the new reality. Though the desire to post to the internet remains the motivation is somewhat sapped. Add to that all the legal stuff that happens when a final parent dies, the clearing of houses as well, it’s all a big time sink. I mean a garage and loft full of model trains! What a geek.

Finally towards the end of the year I’ve had three months of pneumonia to deal with. Now past the very ill stage and on the can’t shake it, always tired and out of breath stage. It was also great news on New Years day to get the worst ever toothache of my life. No emergency dentist available and well long story short I’m still waiting though in much less pain for a root canal to be finished.

So please accept my sincerest apologies if your one of the many people I let down a little this last year. I promise to try to do better this year, perhaps by not committing to so much in the first place.

Don’t get me wrong I’ve had a great year in spite of other things. Purely on a hobby front what I did get painted I’ve been very pleased with. The paper buildings have been popular and I’ve really enjoyed seeing the different communities that have posted them up for all to use. There will defiantly be more of these in the future.

I had some great games, mainly with my brother but also some great face top face games of Talisman plus beer with old friends.Oh and a few funny games with my four year old son. Brilliant.

The collection has grown monstrously once more with Fimir, Norse, Amazons  and yet more goblilnoids playing a significant role much but not all of my 80’s stuff is reaching sort of content stage (nah I didn’t believe me either). My collection of old box sets still in the boxes has expanded and I'll do some closeups of the boxes soon for you all to enjoy. I’ve also branched out into the 90’s a bit more, collecting most of the specialist games released in this decade as well as starting collections of 4th ed Orcs and Goblins, Chaos, Brettonian and High Elves. For 2nd Ed 40K more cartoon Orks, Tyranids, Genestealer cult, Chaos and Sisters of Battle have joined the lead pile with several Necromunda and Gorkamorka gangs. Good prices can be had for much of this period and when looked on with fresh eyes a lot of it rocks. I predict the decade will become hot for collectors in the next few years, you heard it hear first.

My collecting and painting plans for the coming year is to try to get a unit painted at least every two months, six units painted would be awesome and possible. I’ll stick to what inspires me at a given time rather than aiming towards a project or specific army. I also need to put the breaks on collecting a little; I have a heightened nostalgia at the moment so find it hard to say no. This must change.

Finally most importantly I’ve made some great new internet friends in a growing community of enthusiasts. What more could one ask for? Well actually high on my list of gaming things to do this year is meet a bunch of you for beer and even a game. After all once family is safe what more is there to life than beer, games and friends?
Posted by Erny at 04:45 5 comments: