We're an anarcho-syndicalist commune. Landestrum for my Empire army.


Or oh there's some lovely filth down 'ere.

Ten days after finishing the basic paint job on the crossbows I've managed to finish the Landestrum peasants. A mix of original citadel and a few foundry re-releases. I've done a few weapon swaps to add some farm implements and to break up the all clubs vibe that was going on. The weapons are all from Essex miniatures and were available when these figures first came out. I know because I bought some at the time from the Guardroom in Dunstable.

I've always wanted a unit of these, pathetic aesthetic and all that. After playing Whiskey Priest's Brettonians I have a new found respect for human levys. Mind you his peasants had shields and spears, mine just hand weapons. There are so many scenarios where a mob of unwashed filth is just the ticket so really I had to get these done. Who knows they may even turn out to be stars on the battlements, throwing rocks and rotten turnips isn't that hard.

As I mentioned in my post about the crossbows, I'm speed painting here, base coat and shade. If I get time I'll go back and highlight before but certainly after BOYL14. They are far from perfect but they'll do at a pinch. To be honest I'm itching to get some layers on them they are so full of character. However I have other units to get done and I think less than two months now. Speaking of other units the next unit to get the speed paint treatment are these old perry halberdiers. Empire Crossbows. Gettign ready for Bring out your lead 2014.

Having signed up to a big 3rd ed siege game for BOYL14 it is probably about time I got my units ready. I've decided to experiment with the dips that are available from a bunch of companies these days. The idea being to get the units finished in record speed. I've also decided to take the figures to base coat and washed (rather than dipped) first and moving straight onto an new unit. This doesn't mean they are finished, just gameable with, in case I fail to finish everything to more exacting standards.

Here is the first unit I've finished to the stage where I'm happy to move on but looking forward to go back and finish.

Here we have eighteen crossbows, the three with plastic crossbows are from my original 1980's collection, most of the rest are original citadel picked up from ebay and the obvious ones are from the re-released foundry-citadel mercenaries.

I have tried to give them a sort of uniform, purple and yellow which sort of follows standard colour on metal of the middle ages but keeps them distinct from Bretonian forces. I've also tried to keep them looking like a ragtag bunch with a mix of uniforms/personal choices. Obviously the majority of these are late middle ages not really Landsknechtes so I haven't gone for a riot of colour. 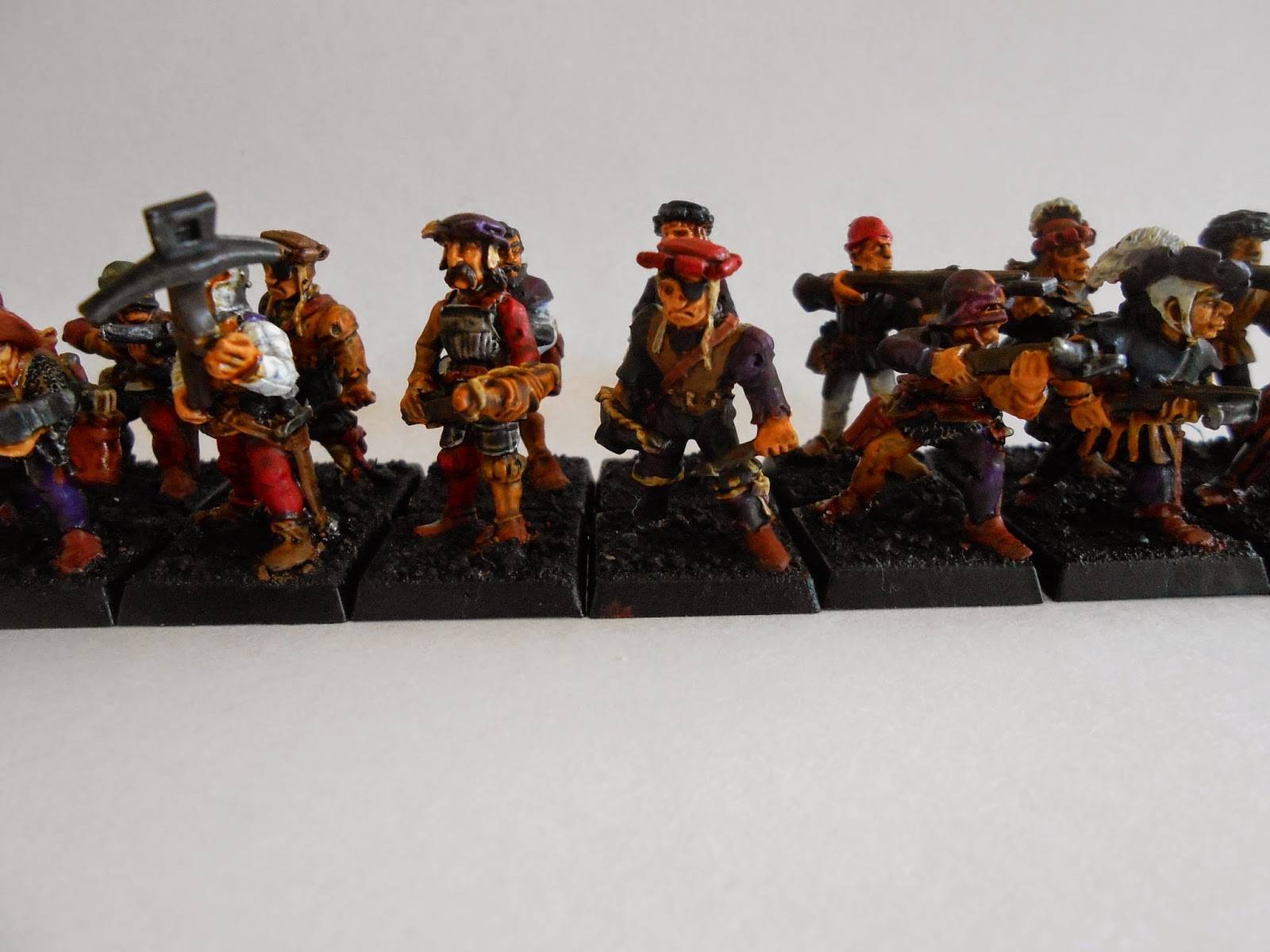 The two guys in the middle here are the crossbow offerings available in the foundry citadel mercenary re-release packs. They were picked up at the first BOYL last year. 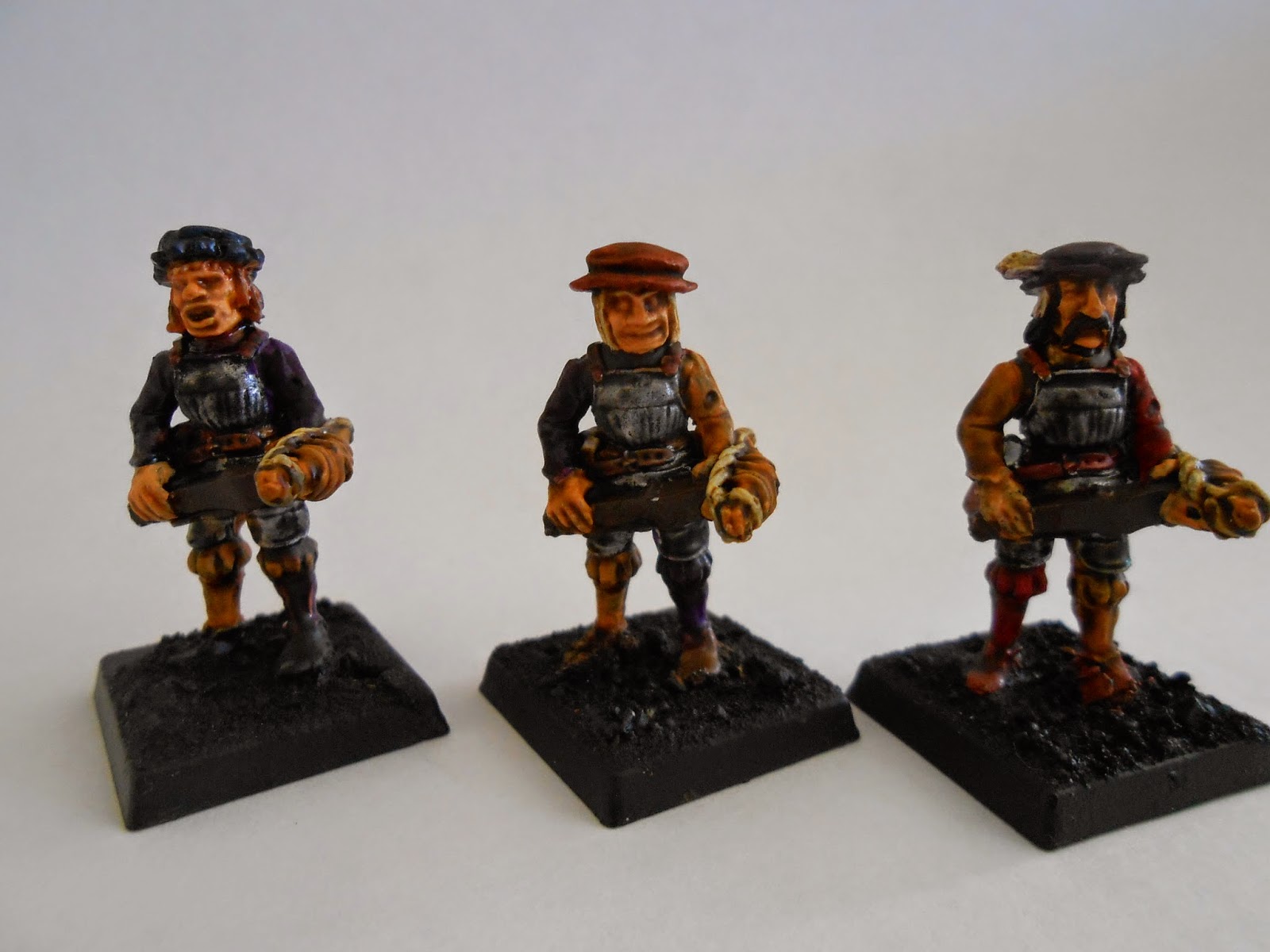 I've done some simple head swaps to get more variety. To find out where the heads went stay tuned!
I'm looking forward to getting back to these and doing the highlights to properly finish these but once the bases are done they are usable now and I still have a lot to do.

Speaking of which here is a single picture of the next unit I'm going to paint up to this stage: