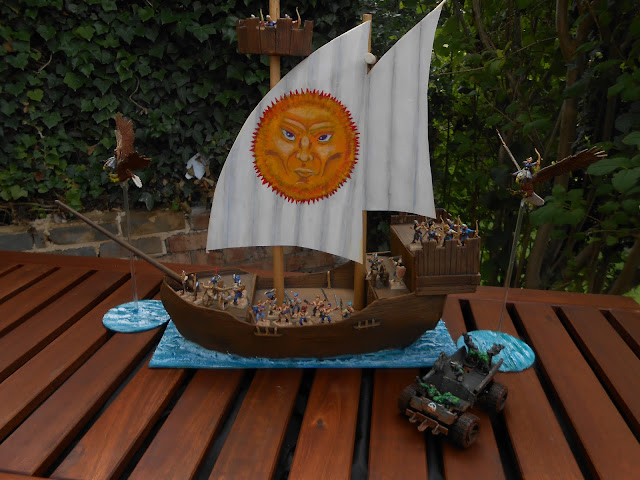 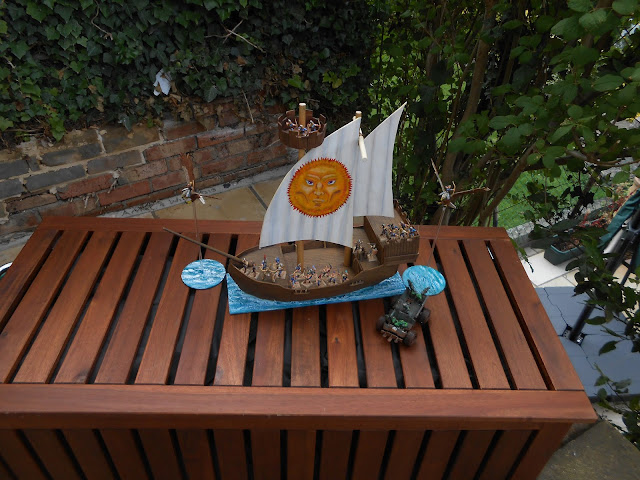 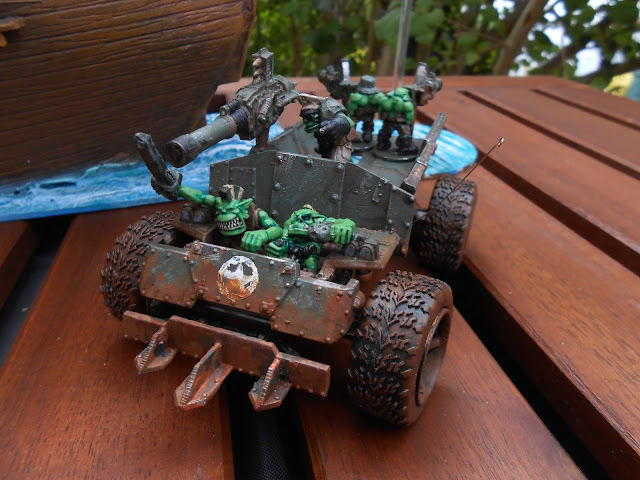 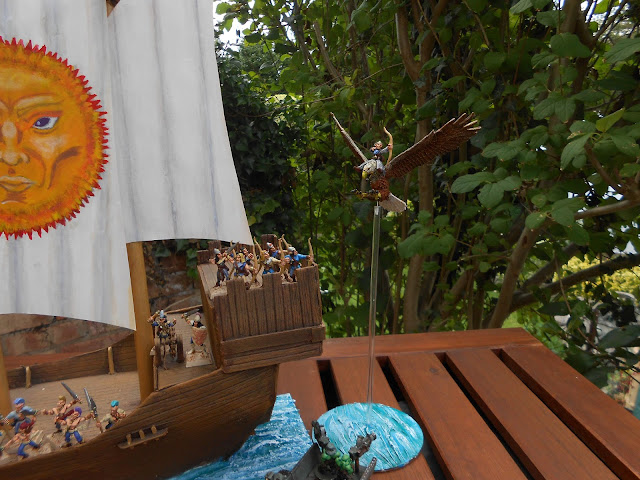 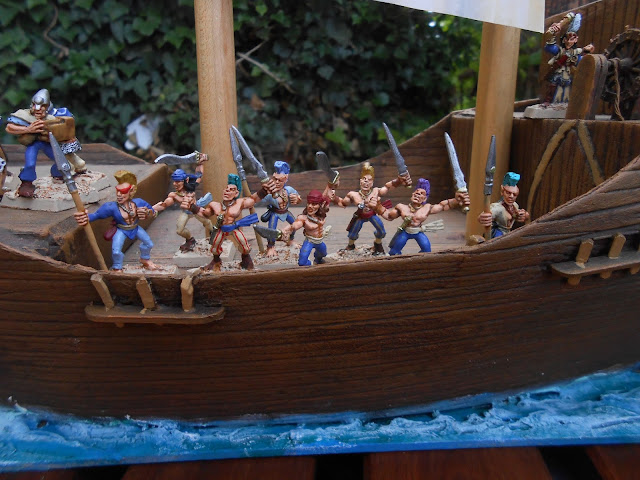 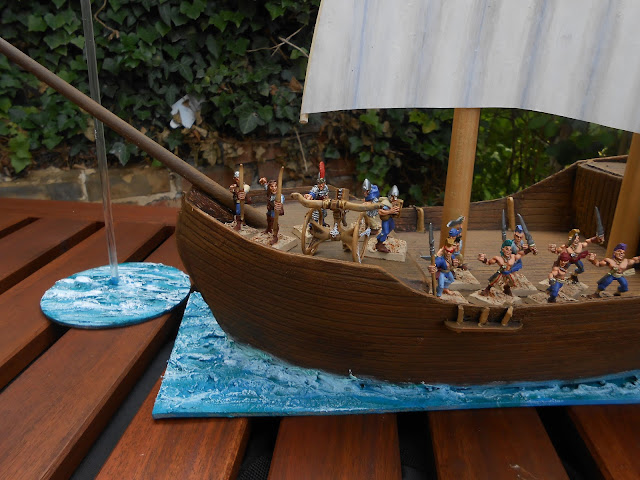 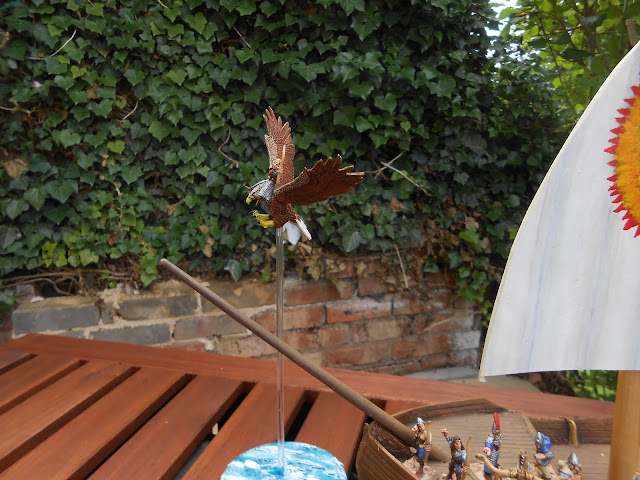 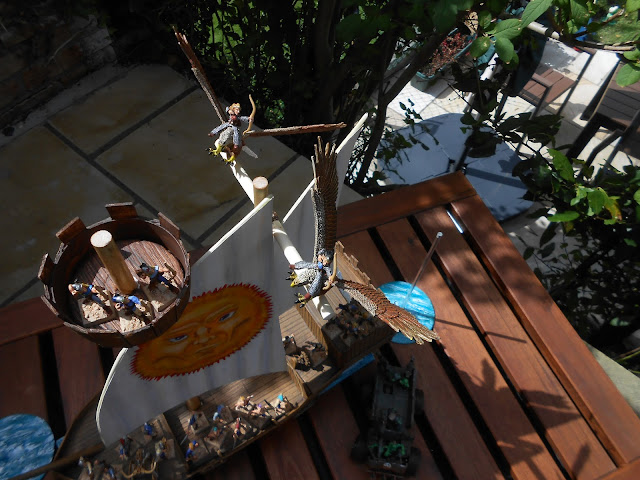 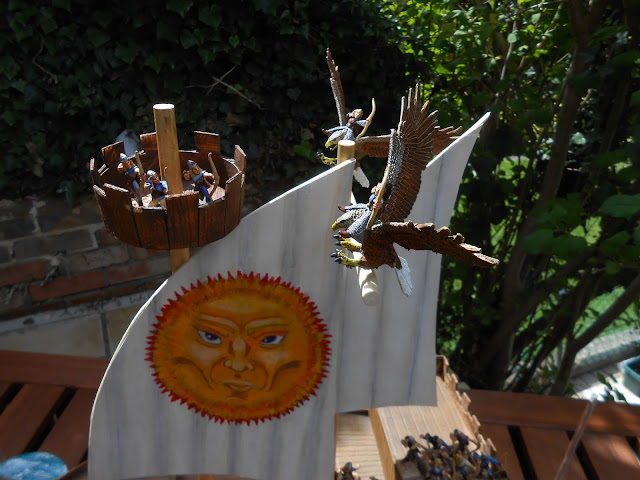 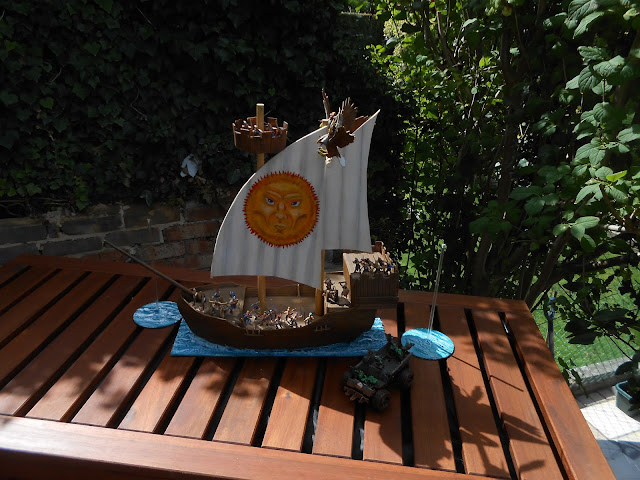 Just so Captain Crooks can stop worrying here is my part of the Deathrace 40,000 race track. 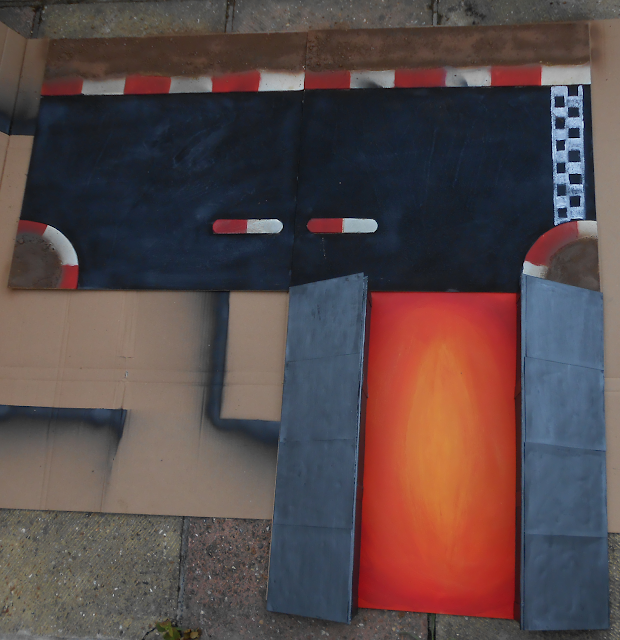 I tacked the sails onto my ship this evening, just to make sure everything was looking ok. I have to say I'm jolly pleased so far and felt like sharing with you. Still to do, finish painting the boat. Finish the sea base, finish the mast fighting platform, paint two eagles, finish the crew. 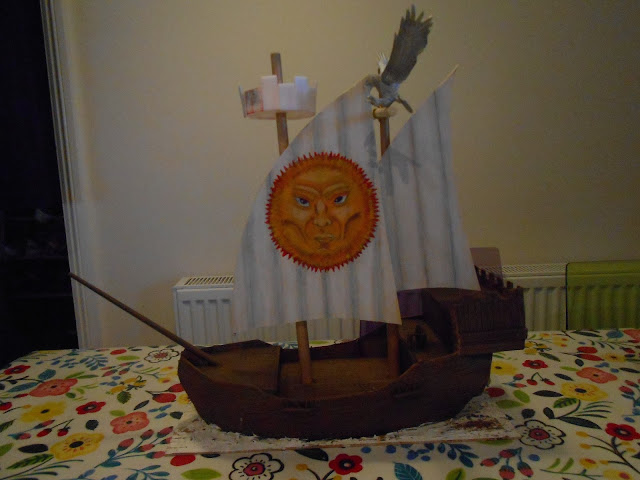 Finished the truck, or is that Master Seargent Ernie Blorko's Motor pool Jeep.

OK I got it painted for the dead line and came up with a bit of a theme. As Death race 40,000 is a bit of a wacky races I decided a daft theme was in order. Blorko and the motor pool boyz are out to make some doe by winning Death race 40000.  Blorko has convinced them all they can rig the race in their favour and it only cost them 12 bucks each to join in. Oh and as this is an RC truck I thought I'd best include a short video of it being driven.

The crew will follow but the truck is painted. 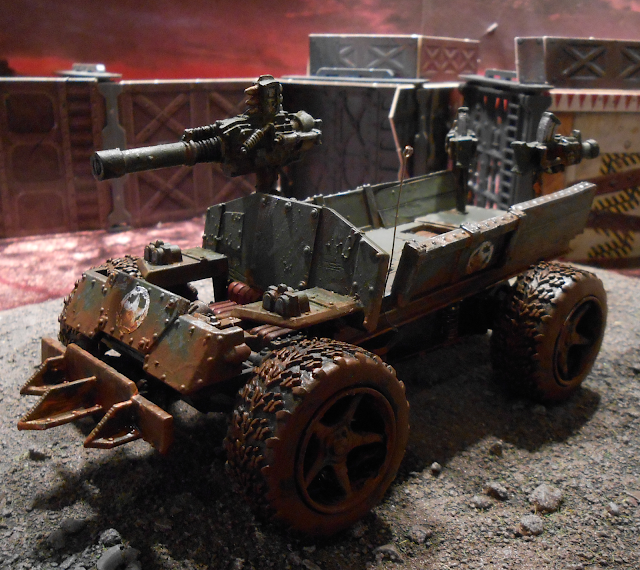 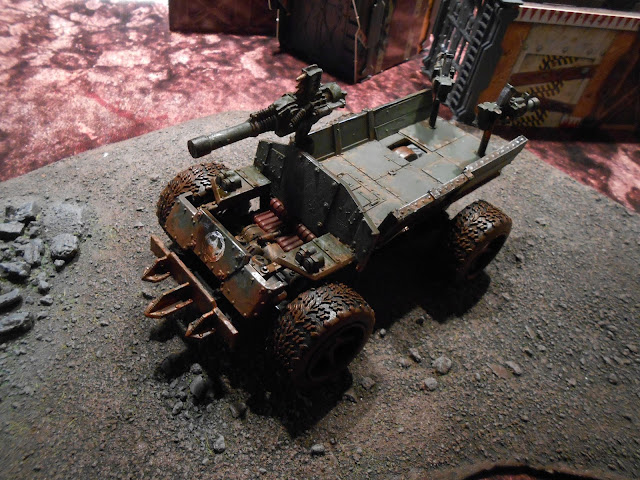 I'd planned to spend today and tomorrow finishing my Ork Truck but my wife had other plans! Several Lorries worth of Ikea Furniture to put together. I don't mind Ikea stuff, it goes together easy enough but she decided my eldest needed a whole new bedrooms worth and ordered a load of garden stuff to. A good weekends worth.

I need to get my truck done by Monday so a late night build was the only way. I had plans for so much more but like a desperate Mek with a boss to please and no time I ditched the cleaver ideas and just stuck on some shootas.

Anyhow here she is. I just need to find time to paint it and come up with her name by Monday. 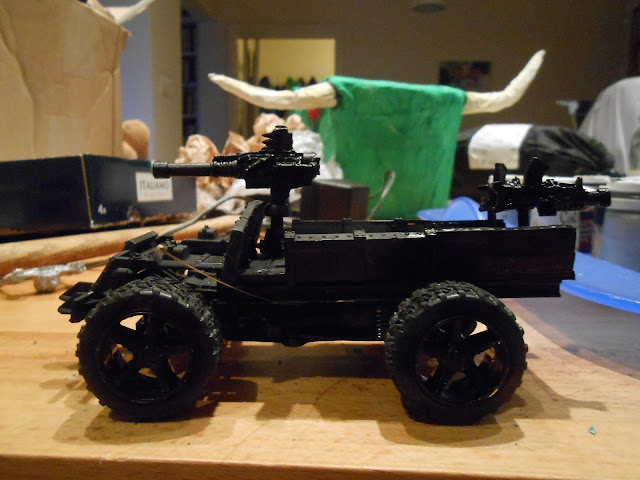 I solved my mast problem a few weeks back but have just got round to cutting and fitting them. Now it may be obvious what they are but not to me so possible round of applause for the first person to guess what they were before being masts. 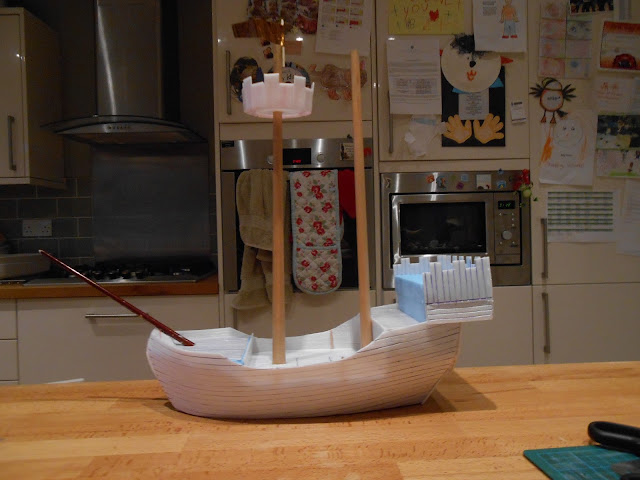 And that's probably all I have time for. Back to painting sea elves.
Posted by Erny at 13:30 21 comments:

Sail of the Century

I've only ever painted one sail this century and this is it. Now it isn't a master piece and really was painted in very little time but I was so pleased with it I thought I'd share it with you. It gives a little clue to the name I'm going to give my Sea Elf ship. Not a great clue but you could get half the name from it. It's my copy of something much better by Gary Chalk. 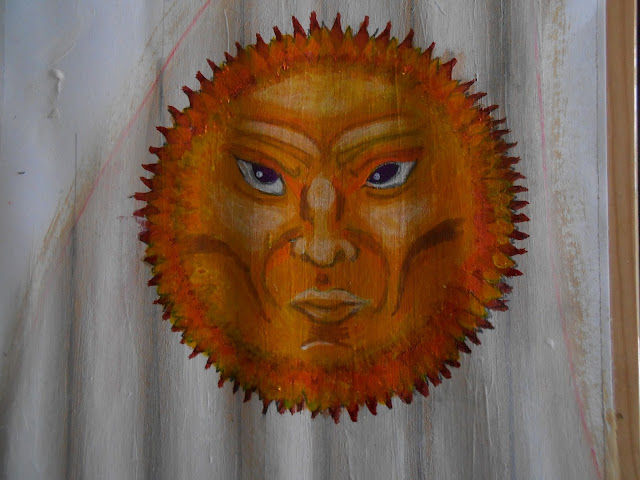 Warhammer fantasy battle: it does what its says on the tin. 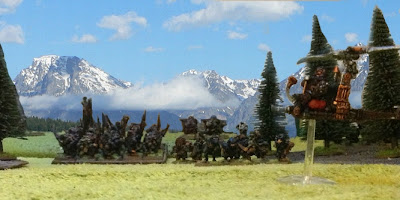 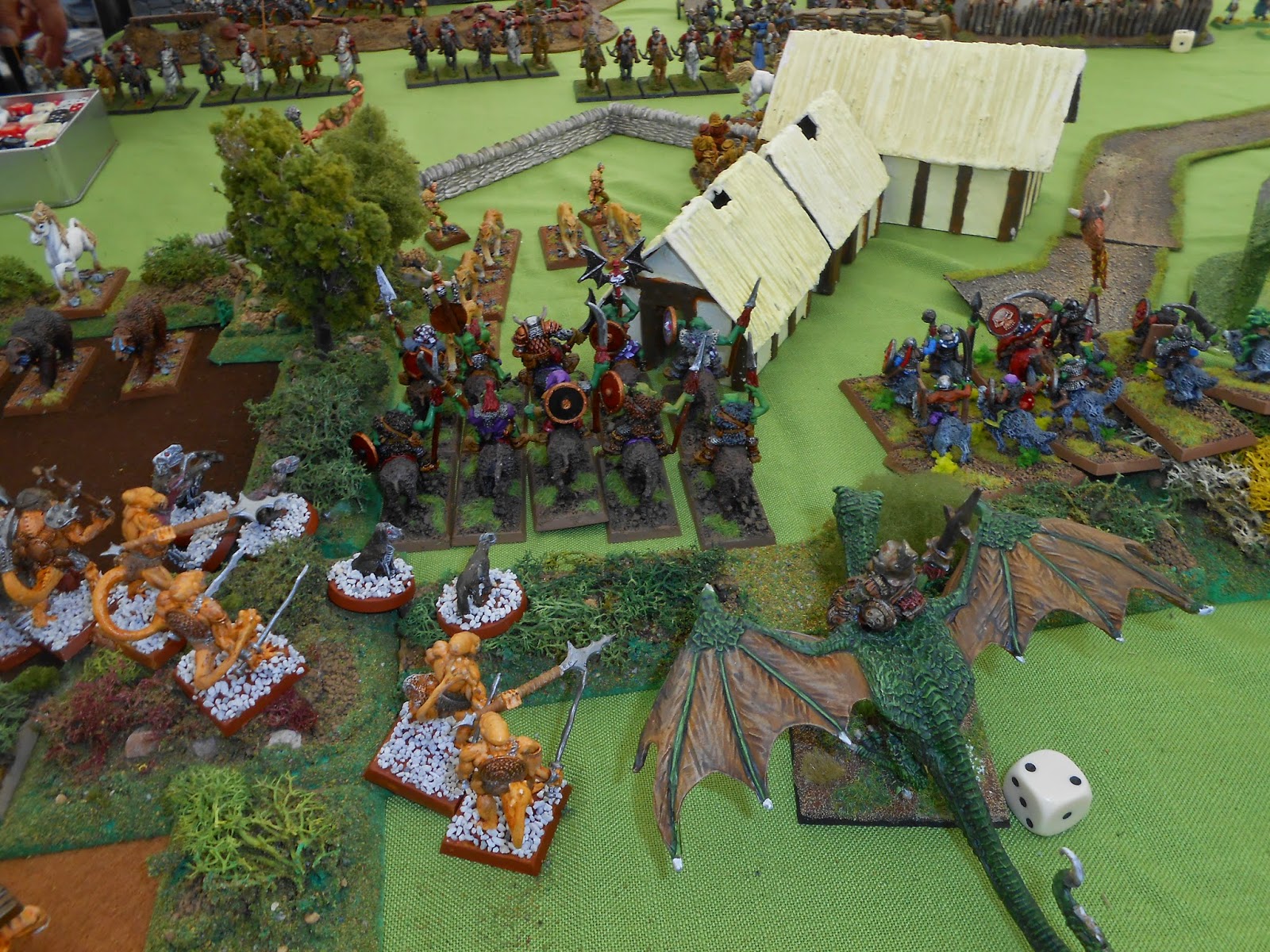 I've been playing warhammer since the late 80's and by and large in all that time the game has
remained, for me the same. I played 3rd, 4th and quite a bit of 6th. I enjoyed all three of those iterations immensely and truth be told there is very little difference in them. If you can play one you can play the other.

I'll admit that I've dallied a while with other systems, RT and 40K 2nd got a good look in, Fantasy Warlord and Armies of Arcana got a go and various skirmish systems. I'll leave aside historical gaming and admit I always went back to Warhammer. Why? 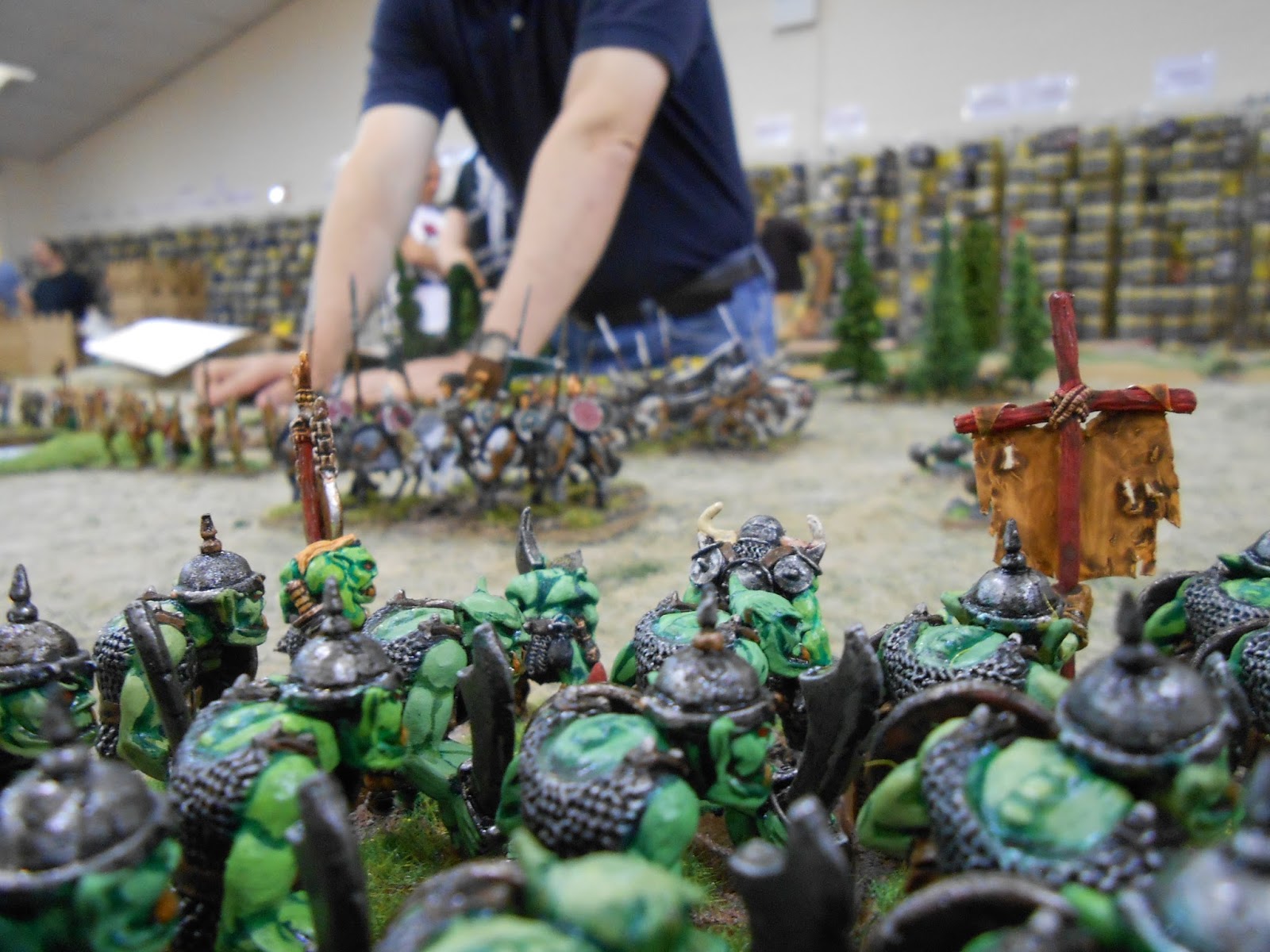 Because as I suggest in my title it does the job with no fuss. My games from an early age were always 1:1 clashes of my little models, each an individual. Only Warhammer stated them up individually and gave them each a chance to fight to the best of their skill, defend to a better or worse degree, damage or be damaged according to their physical make up and rely on their armour and equipment. The individual soldiers act to the wishes of the heroes and wizards around them and the monsters that populate the world. In short you couldn't get a better fantasy battle game. I don't feel the rules are overly complicated and resolution is quick and easy. With stats for most things rated out of 10 almost any situation can be dealt with by a half awake GM or a couple of mates having fun.

And this is why the monumental happenings in the GW world mean nothing to me. My game still exists. I could give the new rules a go, I may but what I already have isn't broken. Never has been and never will be.  And this to me is oldhammer, bumbling along in my own personal way playing my fantasy game the way I want and reaching out to people to say,"Who wants to play, War-ar-hammer. Who wants to play, War-ar-hammer."


Forget the guff do you want to play or not? 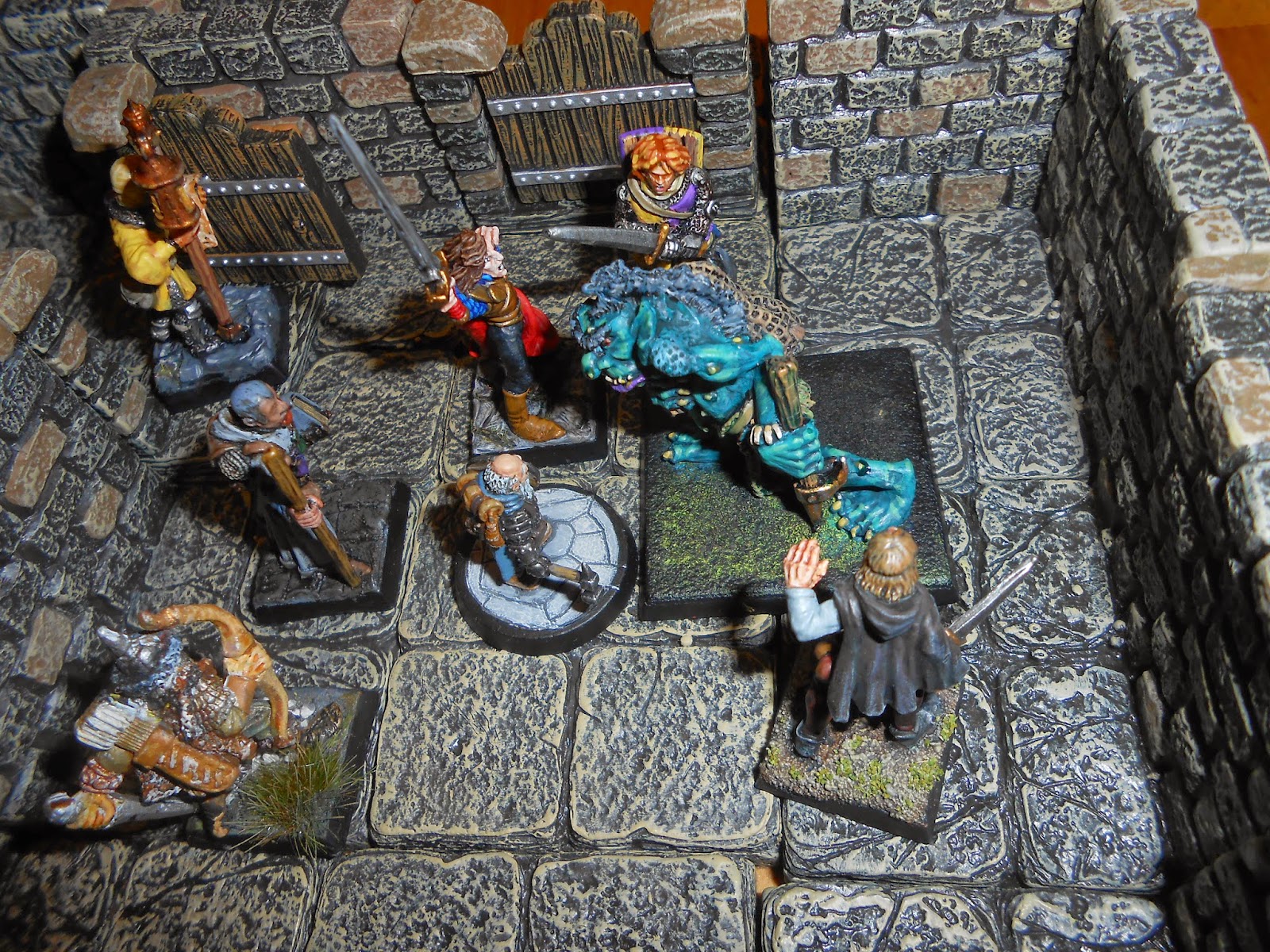 I thought I'd best post some progress with one of the BOYL15 projects I have on the go. My sea elf ship for warhammer ahoy, or perhaps Oldhammer Ahoy. 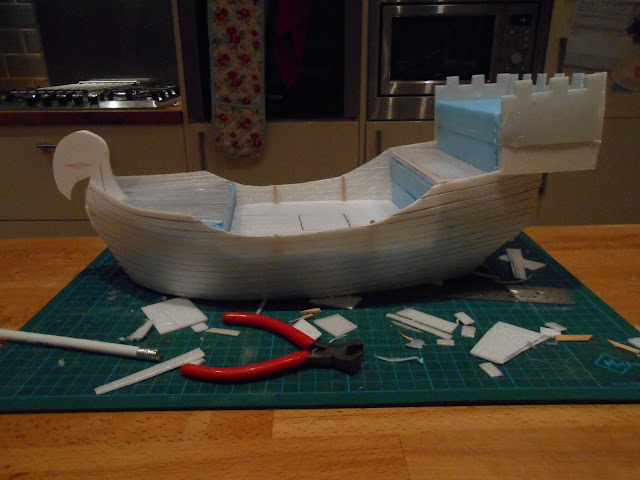 I wanted a ship no more advanced than a cog but built as only the sea elves would know how. The aftcastle will have perches for giant eagles and shaped stone porjectiles for them to carry and drop as per the pick up rocks rule in the main  rule book. It will have a lanteen rigging and at least one mast in the centre, another if I can get one on without taking up too much room. Currently my masts ar too big so alternates need to be sourced. 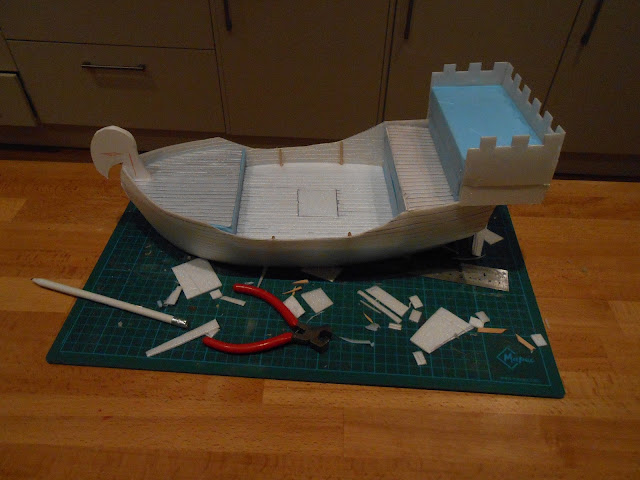 She is build from a core of blue foam and clad for speeds sake in depron which has been scored with a wood effect and planks. I have until the end of the week to finish the build and will be adding details up untill then.