The battle of the Manling Fields part 3 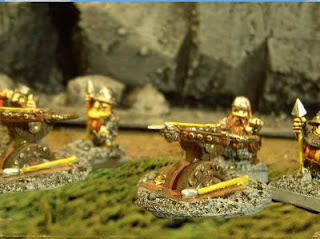 The great bolt throwers fired once more but the explosion of the cannon must have unnerved the crew. They both missed and the rat horde went unscathed. The crossbows faired better, raining death upon the main rat horde, enough that they wavered for a moment before their Warlord reasserted what passed for discipline in their ranks.  Still the mass of vermin in that unit out numbered Lord Brouhahas unit of warriors, still they came ever closer.

On the right, supposedly refused flank the rat horde came on a pace, a fusillade from the remaining Thunderers did little to slow their pace. Perhaps there would be time for one more volley before the ratmen would be in a position to charge the flank held by five lone dwarves. 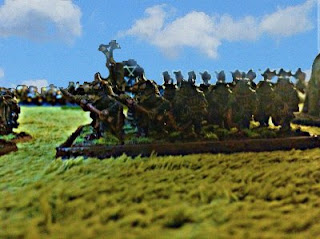 The Magician Small Daniels found within him the courage to run forward and calling forth the magic contained within an ancient ring cast a spell upon the scuttling soldiers of the rat warlord. “You’ll like this, not a lot!” he cried at the slavering foe, arcane energies engulfed the main swarm weakening their resolve. “Now that’s magic!”, Small Daniels cried with triumph but the cries were too soon. With some obscene force of will the Skaven cleared their minds of the decrepit magicians influence. 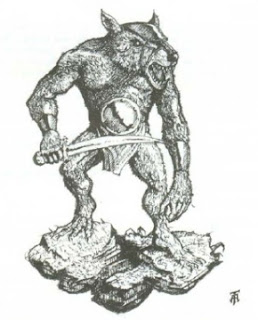 With a chittering roar the clan moulder beast handlers let their Rat Ogres go. The monstrous abominations charged straight for the diminutive dwaven wizard. Staring wide eyed at the awful doom that approached Small Daniels hitched his robes up around his waist to reveal two pasty spindly legs. Those legs now carried him screaming back to the dwarven lines, “D’Bieeeee!” he cried to his demonic paramour as he raced past a unit of crossbow dwarves.

To the east the rat skirmishers attempted to hit the hovering gyrocopter with their slings. All the shot flew wide of the mark but it woke the idling gyrocopter pilot. Perhaps their was more he could do than just keep track of the eastern flank.

More warpstone rained down on Lord Brouhaha, more warriors fell to the ratman fire. Lord Bruhaha gritted his teeth, things were not looking good. He cursed himself for falling into a ratman trap and gripped his hammer more tightly. “Form shield wall” he called, if he were to stand without shame next to his ancestors he would have to sell his life dearly. 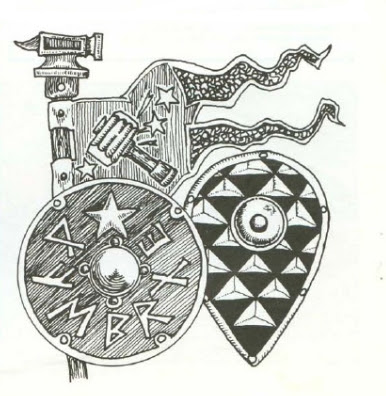