Here’s to the Guardroom.

It’s probably fair to say that most people who collect 80’s miniatures, games using 80’s rules or paint miniatures in an 80’s style was a kid or young adult in the 80’s. So it is probably also fair to say that within our band, given the scarcity of 80’s Games Workshops, that most of us got our Citadel, Grenadier, Ral Patha, Warhammer or D&D fix from local independent stores.

Recently I’ve had real cause to tread paths long neglected and as fate would have it that path lead past The Guardroom in Dunstable home of Axle. What once stood on that spot was for me a slice of gaming culture now gone forever and perhaps one most sorely missed. The dingy, packed to the rafters games shop.

Some time in the mid 80’s my favorite place to buy airfix soldiers and tanks closed and so I found my way to a pokey little shop known as the guard room. There was a small collection of plastic kits but otherwise it was like no model shop I had ever encountered. Behind the door a stand of Osprey books stood, The left wall had cabinets of lead historical miniatures, you had to ask the owner to get the one you wanted out for you. To the right were wooden shelves with brightly coloured books with dragons and such like on and boxed sets of grenadier and citadel miniatures. Around the corner were racks of blister packs, yellow and black for Grenadier that would become my first favorite but also the painted picture packs from citadel. There was also Ral Patha and Metal Magic, Alternative armies. I even bought a pack of Asgard dwarves from there. 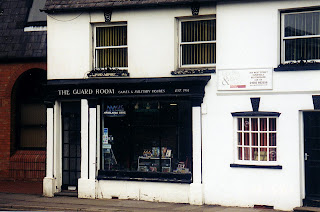 The counter ran in front of a wooden door I always imagined opened up onto a treasure trove of Fantasy minis though I guess it was probably just the back room. They specialised in army boxes, way out of my budget, so there were often people much older than myself in there buying brown boxes with white labels on. I thought it was cool and proudly carried my Guardroom Axle carrier bags round town little realizing they were just my badge of geekdom. The place was dark and to a 13 year old me mysterious and exciting, I loved it modern game shops seam to be bright lights, clean furniture and corporate messages. In I believe the late 90’s or early 2000’s it was sold to a chain and eventually it was no more.

So here is to The Guardroom and all the other places just like it. All just a piece of social history now I guess.
Posted by Erny at 08:52