Skirmish at the rock. An Orc Warband battle report.

Harbash grinned, "dat lit'l toerag Slagnark fort e cood run, fort e cood 'ide aaat safely wid a bunch a gobbos. Dat litawl toerag noo nuffink." His boyz the bashers were with him and they two were itching to carve a new one on Slagnark. It had taken balls the size of fabled squigoths and treachery that the pointy eared pansies would  be proud of to do what he'd done. Harbash wasn't going to be pleased until Slagnarks flayed skin hung as atrophy on the grinning sun banner of the bashers.

The gobbos, the Thieving gitz, as they were known locally were much loathed in the local area and mnay locals had been quite happy to point out the current location of their camp. Harbosh had also been told the usual tactics of the thieving gitz. Send in the stikkas to soften the enemy, meanwhile the gobbo spears sat on their arses. All the time Sodgit the self styled shaman warlord blasted fireballs and sent spirits to make the enemy fill their breeches and run. Harboth plan in return wouldbe to send his boyz down to bash the gobbos and he'd personally see, with his own bows that the stickas were driven off. Hed have plenty of time to come back to the main fight crashing into the side or rear. Things began to unravel almost straight away. The gobbos, probably incentivised by Slagnark in their ranks started marching forward.  They'd be on the Bashers before Harbash had a chance to chase off the skirmishers. "Wait on dat 'ill", roared Harbash, "I be back in a bit." he then strode of with his bow-orcs to crump some goblins. The little bleeders began shooting at him but t o no effect. He even let his own boyz return fire grinning as one of the little runtz keeled over, a thick crow fletched shaft  stuck in it's body. 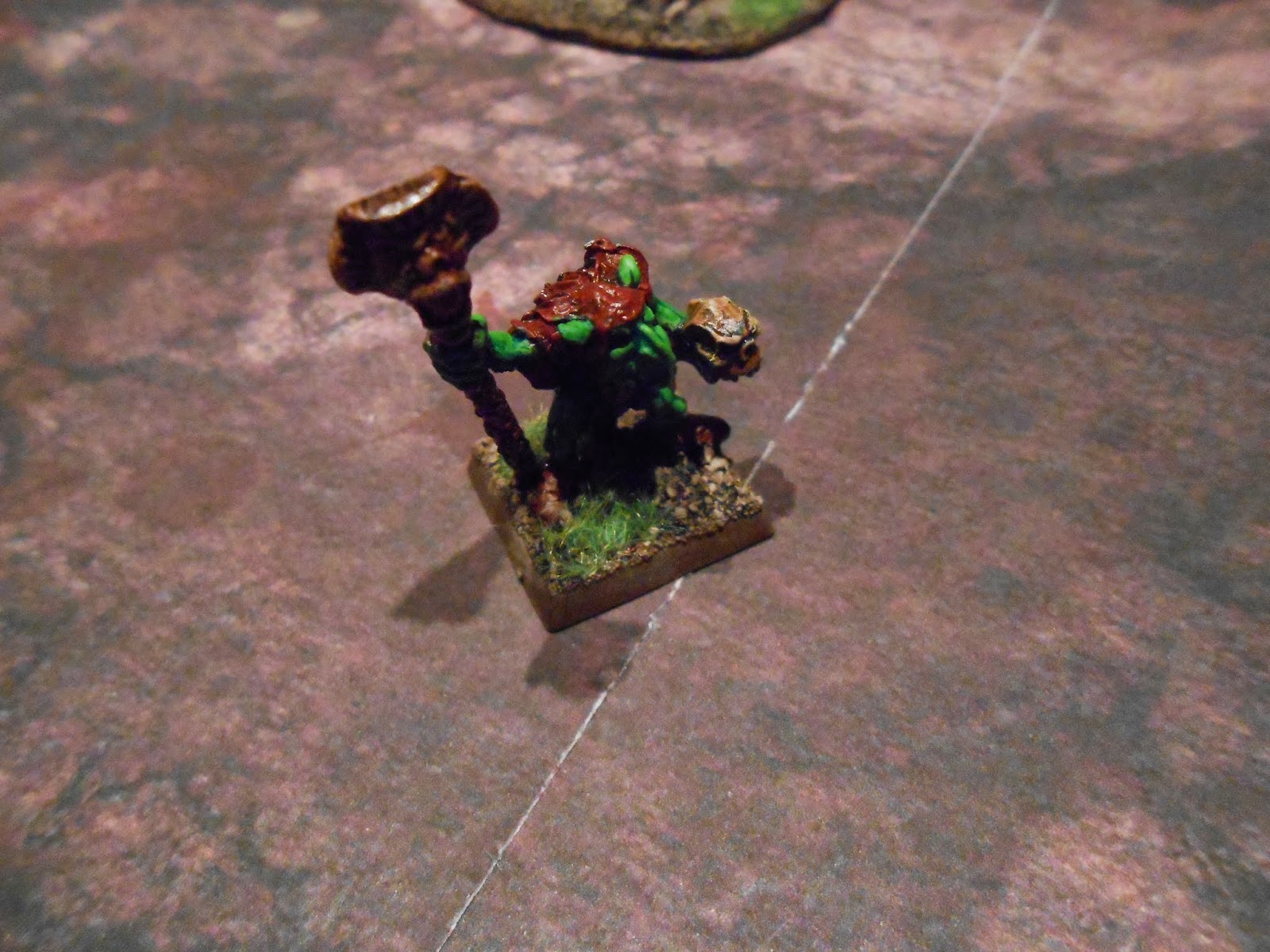 Sodgit the shaman started convulsing in a weired dance before sending ancestral daemons to sap the resolve of the bashers just as he'd sent similar spirits to boost the courage of his own boyz. The boyz didnt' seam convinced by the spell seaming ly shrugging off it's effects. Meanwhile the gobblin spears edged closer to the bashers huddled in shield wall on the hill.

It was then that stranger things began to happen, the stikkas caused a casualty amongst Harbash's bow boyz who were unable to hit in return. Fireballs also began to fall upon the unit. The goblin spears marched to within an easy charge of the orcs on the hill and then stopped jeering the bashers trying to provoke the charge. And charge they did, with the advantage of height and the impetus of the charge a quick win was expected but with only a single goblin casualty caused the orcish attack stalled. 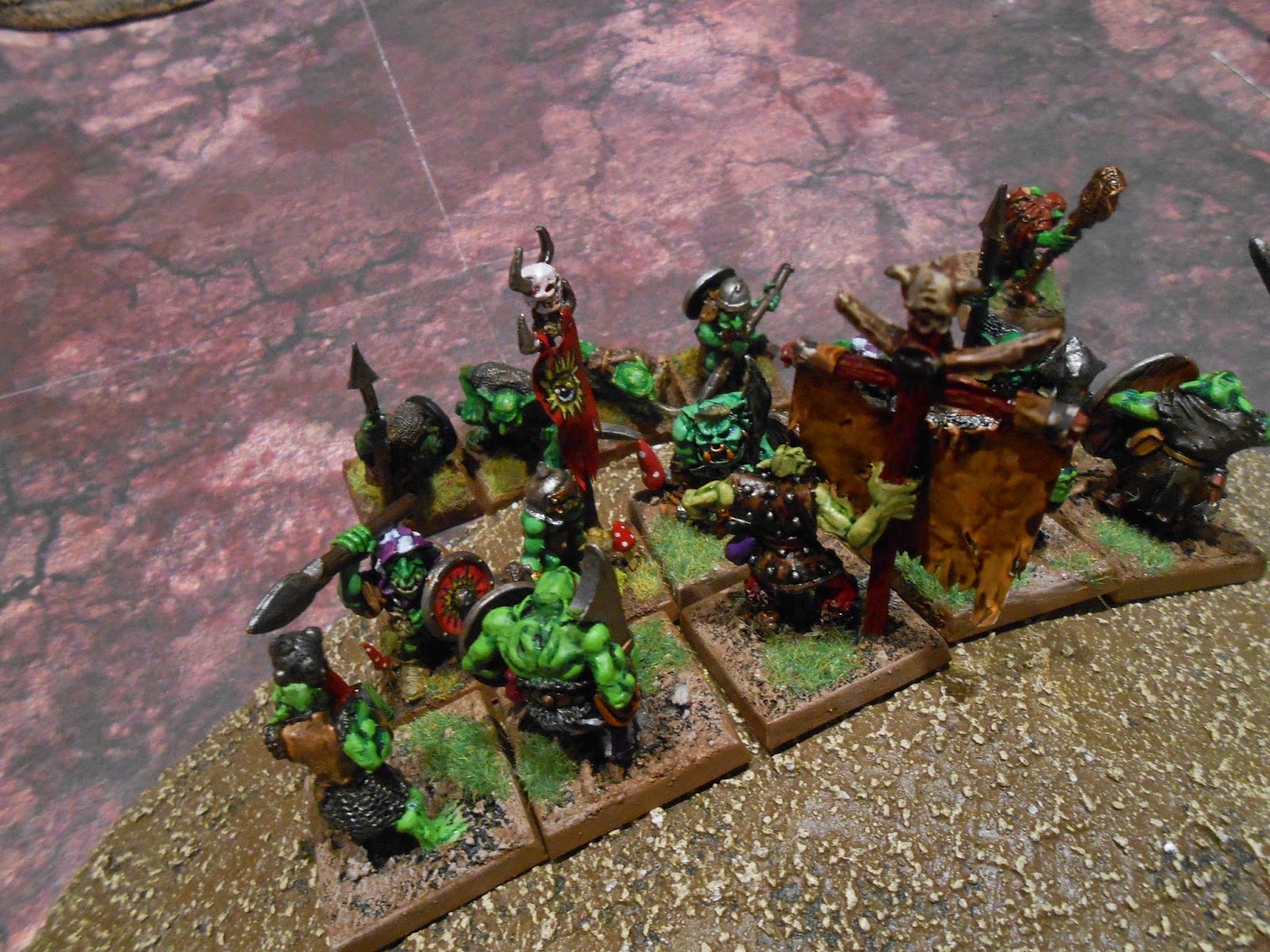 Sensing the turning point of the battle had already been reached without him Harbash turned his unit to charge the goblin spears flank ignoring the goblin skirmishers. A fatal move for several more orcs.
Slagnark set about his old comrades with vicious abandonment slaying one unfortunate boy followed by the improbable death of several others at the hands of the spear goblins. All for no loss of life on the goblin side. The Bashers turned and ran before being cut down to a man, their standard captured as the loan orcish survivor turned tail and fled before being overun. 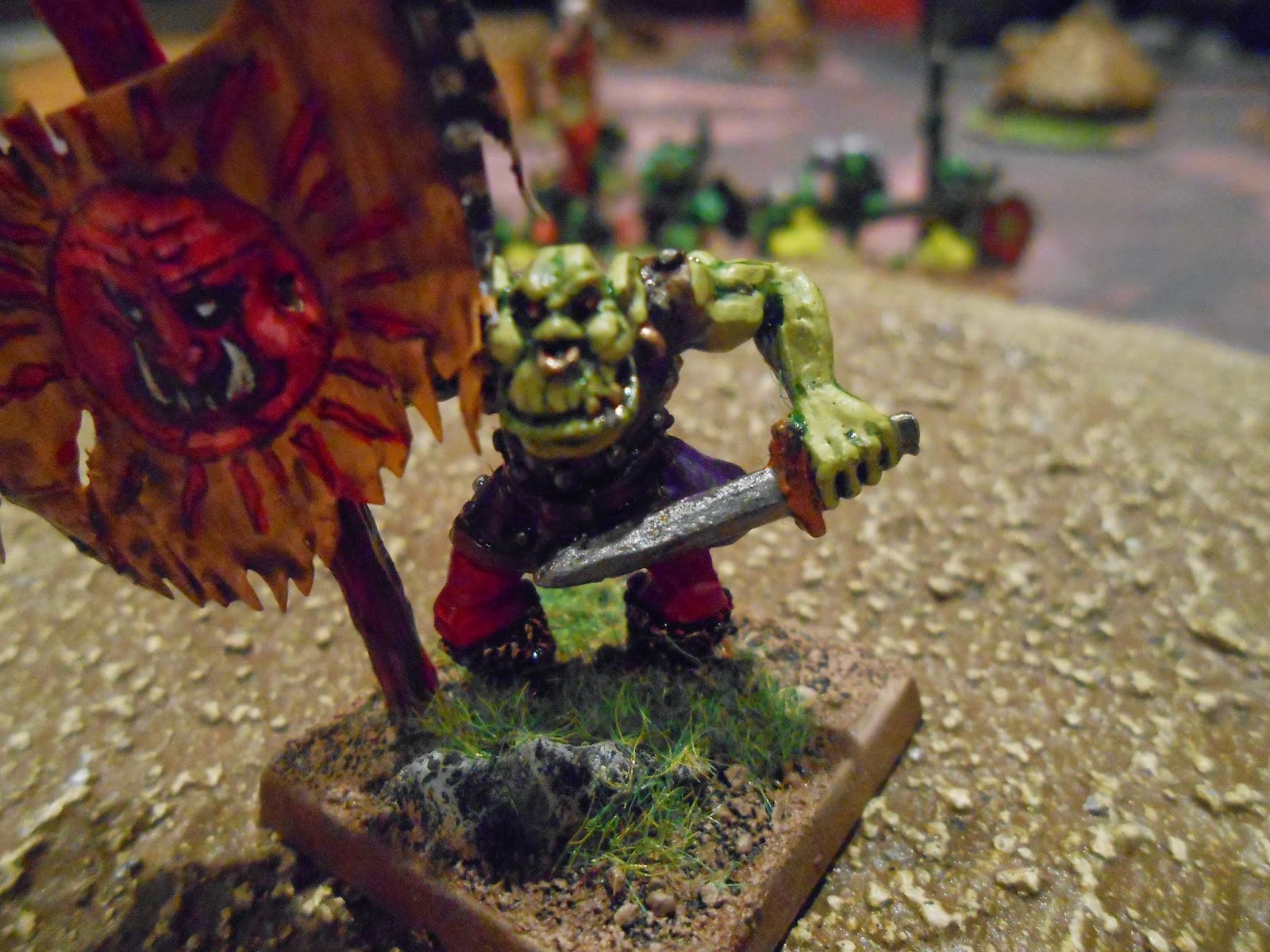 Harbash correctly sensed the time was upon him to run, which he promptly did. He had just received a resounding thrashing from a bunch of gobbos.