BOYL 2015 is fats approaching and the Warhammer fantasy 3rd edition scenario Forenrond's last stand is due to be played again. This is a favourite scenario of mine, I must have played it a large number of times over the years, indeed I took it to the very first Oldhammer day at the original Foundry back in 2013. One thing I didn't do is post up the pictures of the game. Well looking through photos of the last couple of Oldhammer days I naturally came across the pictures and thought you'd like to see a pictorial account of how the game played out. It would after all be a shame to never let you all see this account of a gruelling battle fought long ago.

I'll annotate the pictures as best I can but this was  two years ago. My brother, Snicket took the Orcs and JeffMcC took the elves I was GMing. 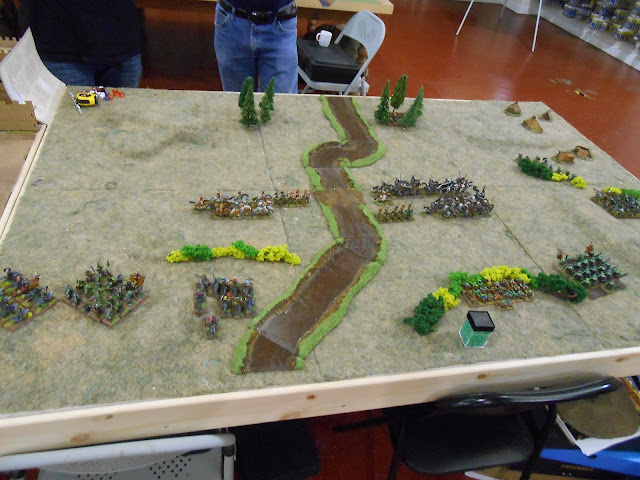 The battle starts as usual with the elven force separated by a river. Forenrond has just been killed and Corma Lightmantle has taken over command in a tricky position. 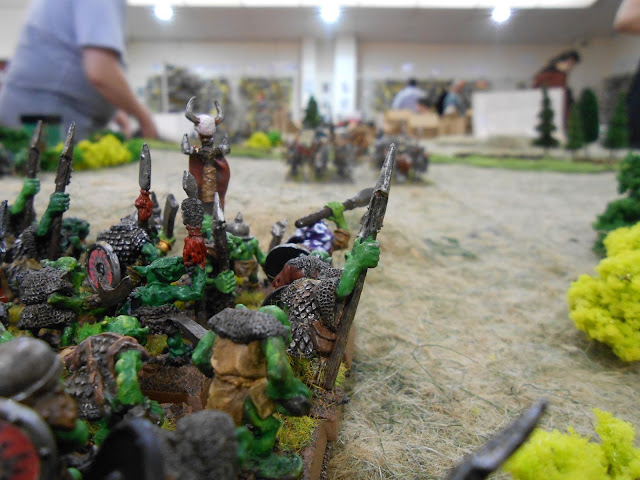 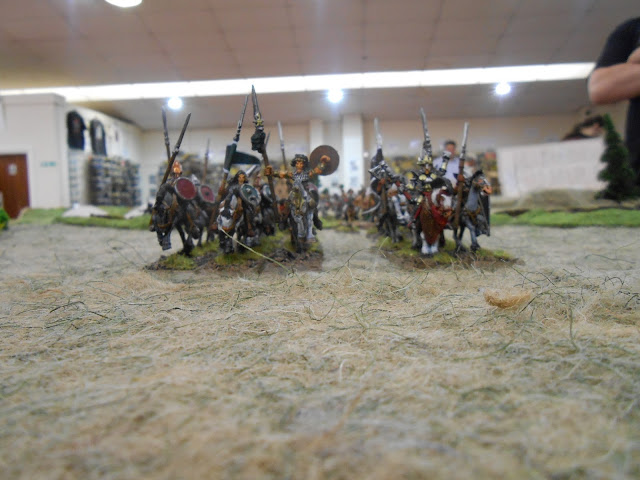 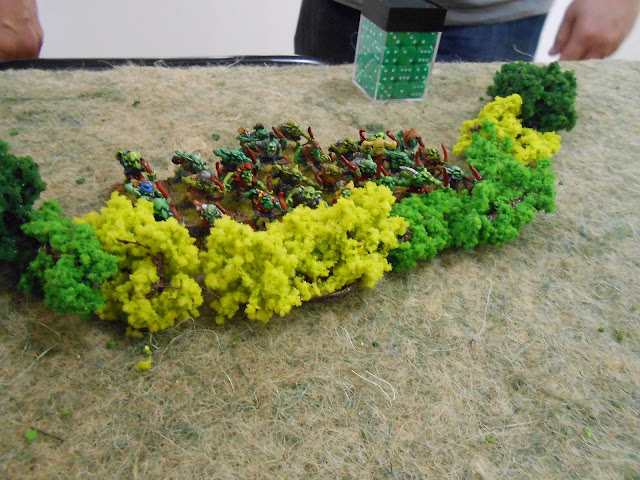 Neo's Nasties take up position behind a hedge. 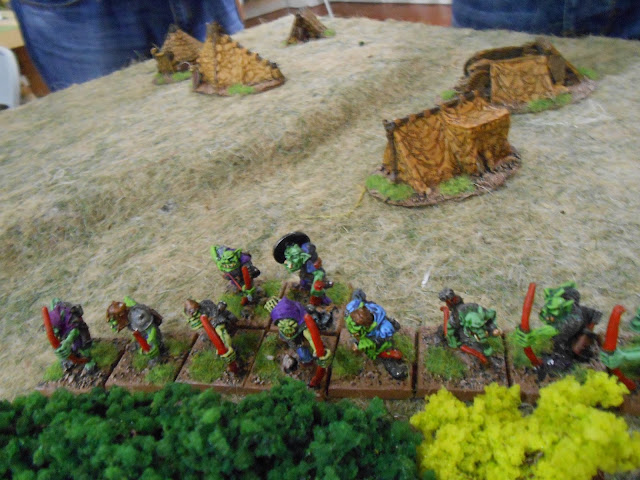 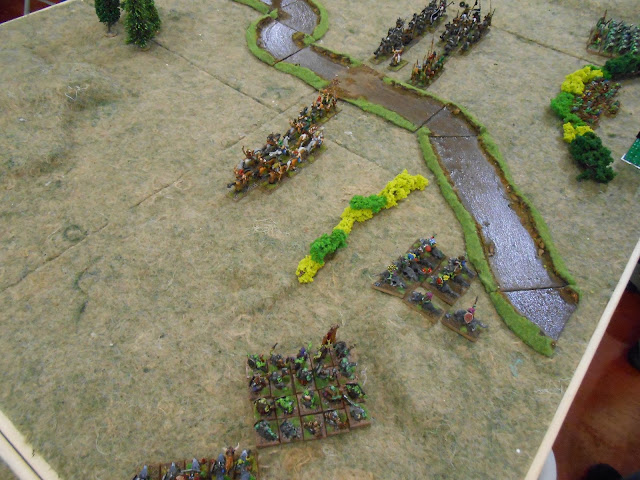 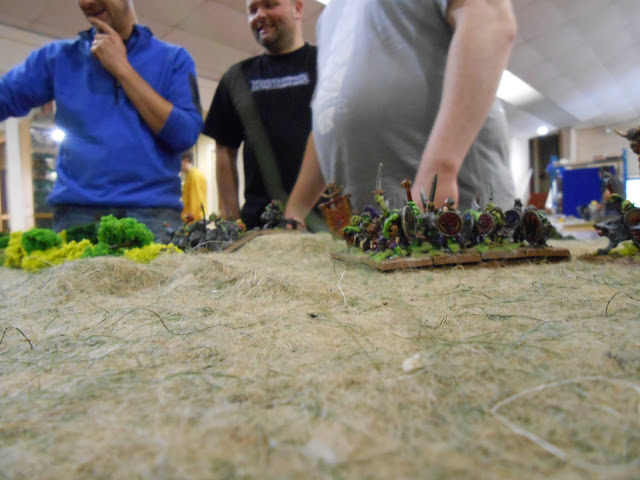 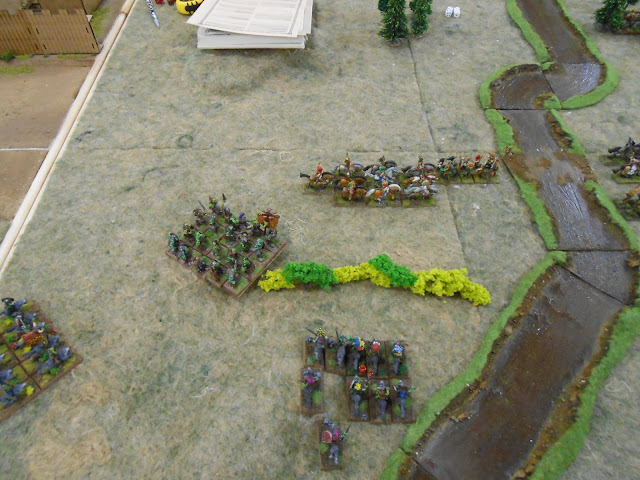 Pepp, The real Fang, Sawtooth and his Killers rush forwards towards the 3rd Elven Cavalry, Drillas Killas also surge forward but Erny's Roamers are left squabbling amongst themselves. 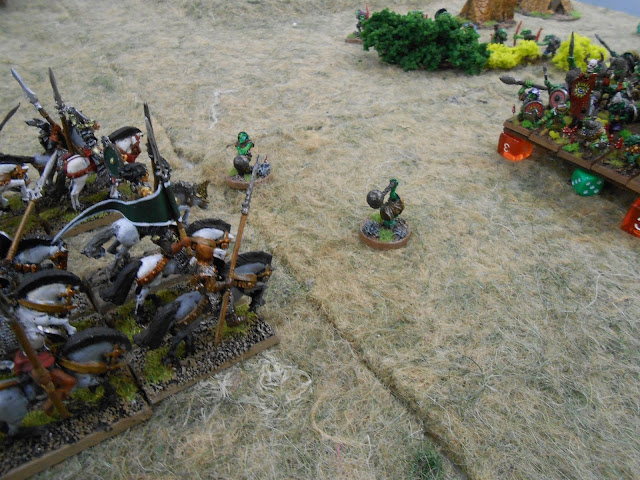 The Pigstikkas approach the two leading Elven Cavalry units and release their fanatics. 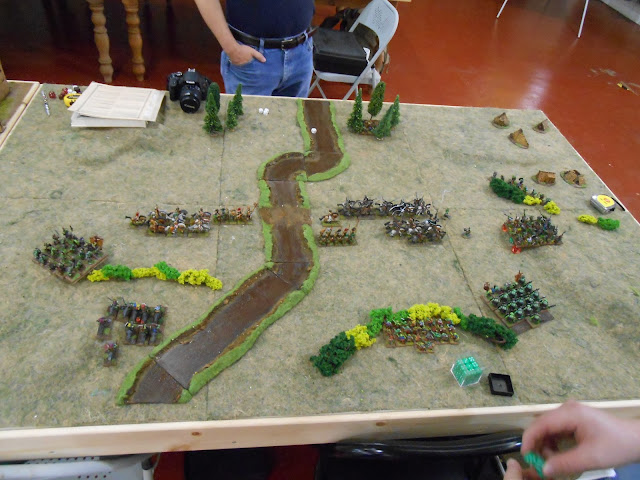 At the end of the orcs first turn the elves are in danger of being caught in a trap. 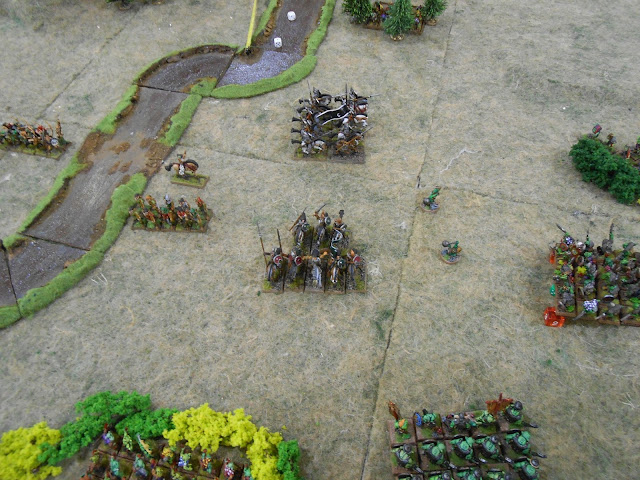 The elves part left and right, mainly to avoid the fanatics but also to try a little encirclement of their own. 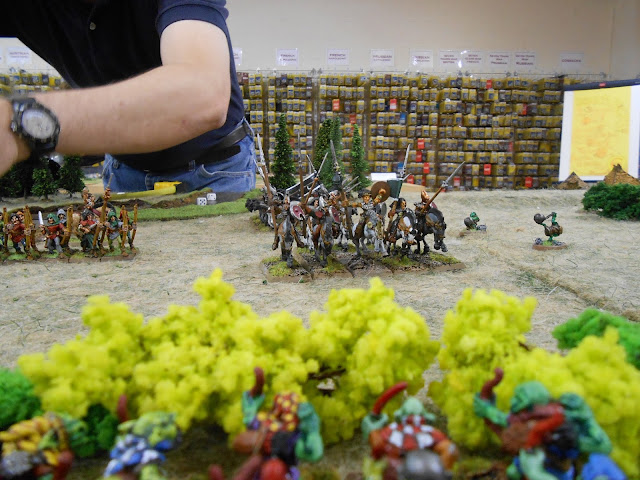 The Nasties  view the 2nd Elven cavalry with some worry and prepare to fire. At only fifteen strong they fear the elves. 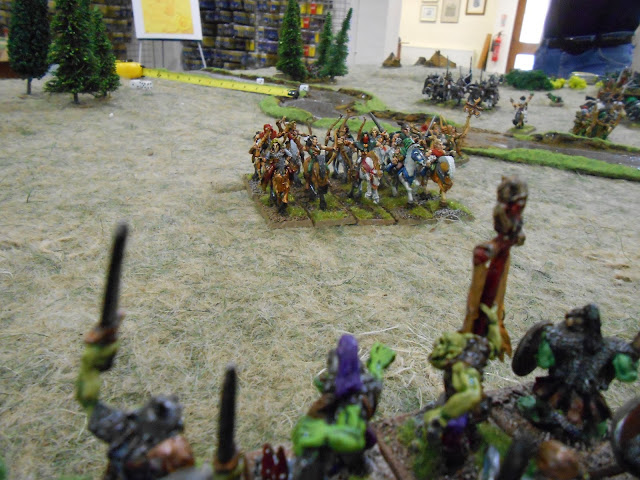 Mean while the Killers, urged on by The Real Fang feel much more confident about tackling the 3rd Elven Cavalry. 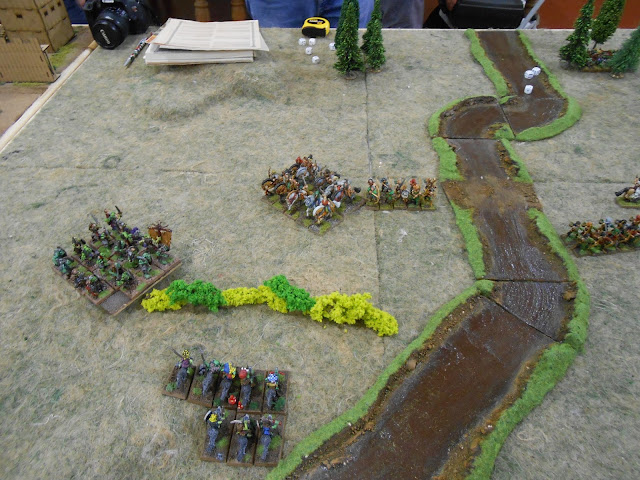 In fact at the start of the Orc second turn they feel so confident they  get ready to charge. 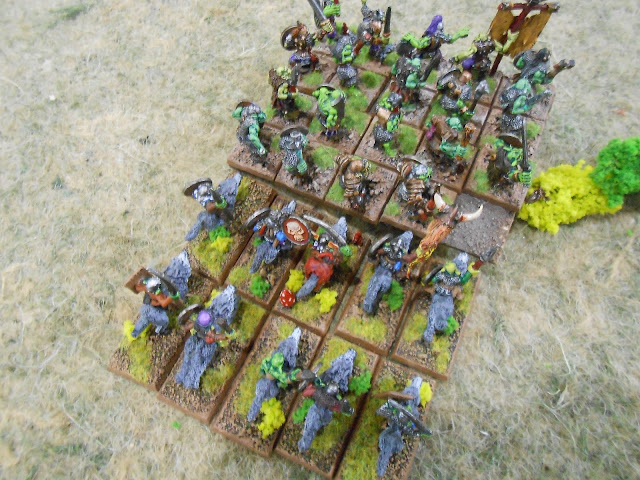 Only to have Erny charge them in the rear over some slight long forgotten by Pepp. 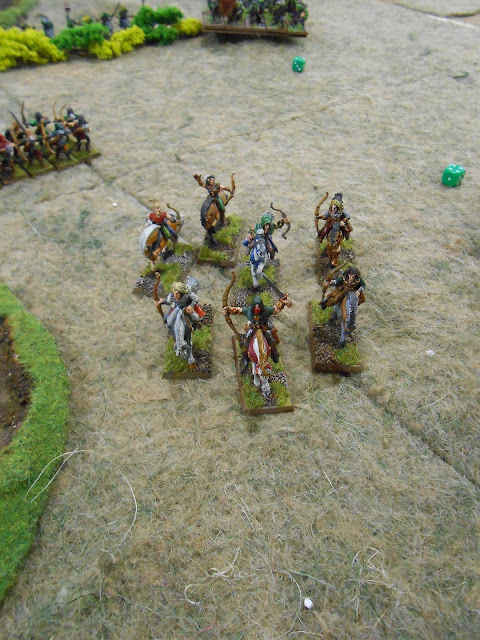 The 3rd elven cavalry receive fire from Drillas Killers and flee as the Ialanth Archers lead by the Sensational Sola Brighthelm try to respond. 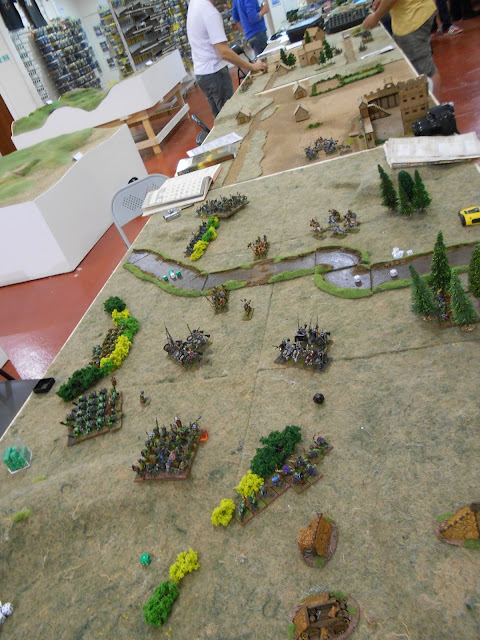 The other Elven Cavalry have also taken damage from Neo's Nasties, The Grusome Jobbos and the Open Sore boyz. The elite elven archers of the dashing Labrielle find that even their accurate fire has little impact against large groups of goblins hidden behind hedgerows. Cormas 1st Elven cavalry are lined up to charge Mandrack The Murderer and his Mad Molesters 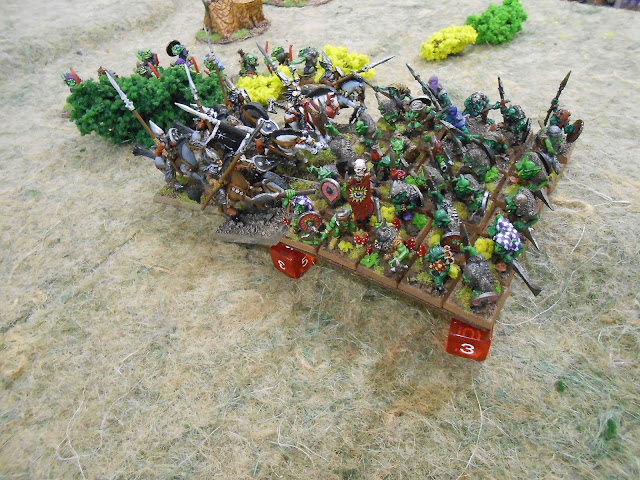 But perhaps wisely choose to charge the Pigsttikas in the flank hoping to escape the Orc trap. 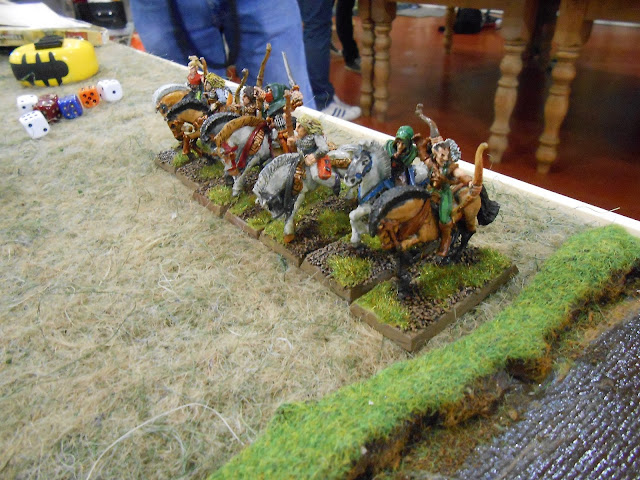 Meanwhile the 3rd Elven Cavalry under  leadership rally just before leaving the field of battle. 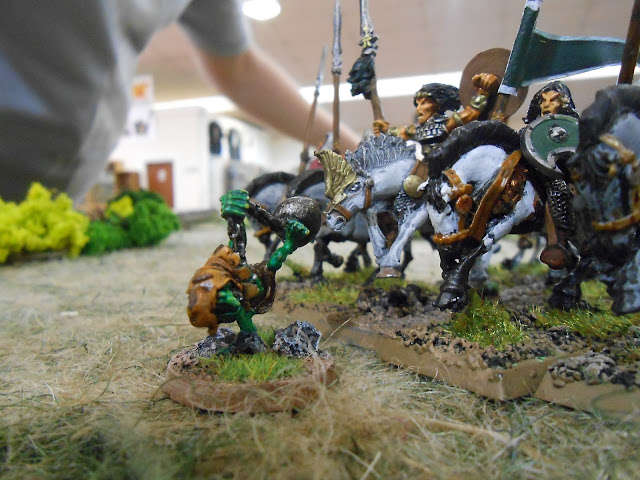 One of the fanatics whirls perilously close to  the 2nd Elven Cavalry. 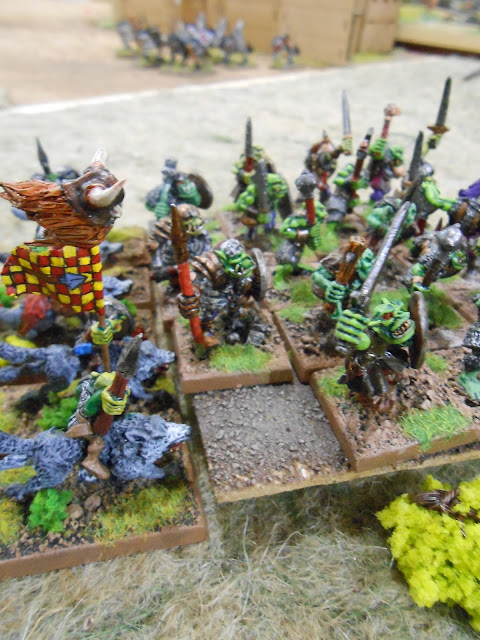 Meanwhile the scrap between Erny's Roamers and Pepp's Killers keeps the two hard hitting units out of the action.


And here we leave the action until the next instalment. Some of you know how this ends because you were there or perhaps we've talked about it but for those of you who don't know for sure I'd love to hear how you think this will play out.