More Helblitzen for my Imperial army.


Whilst the various power brokers of Avalone maintain their own forces to provide for their own security the Council does see fit to provide at least minimal policing upon the streets. Another example of the council looking after the good of all unlike the despots of less happy places. This force of men provides street, slum and sewer  patrols with the power to apprehend any causing disturbance, they are bestowed the right to bear arms in the shape of a halberd and the right to wear a hat of scarlet, the badge of their office.  The contract for this force by tradition goes to the guild of night watchmen and sewer jacks, who happily enough take a red hat as their guild badge. The head of the guild is currently Gustave the Mustache named for his finely cultured facial hair. A Wastelander from the Imperial side he does tend to favor oldworlders of Imperial decent in his force though Bretonnians and even Tileans have found their place.  Known affectionately as red caps or the filth they are universally loved and loathed. In times of war their activities are restricted to within the city policing for disturbances and manning the walls as needed. 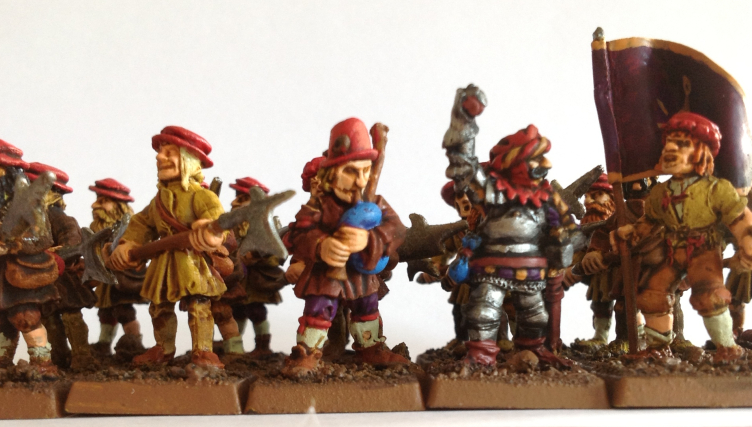 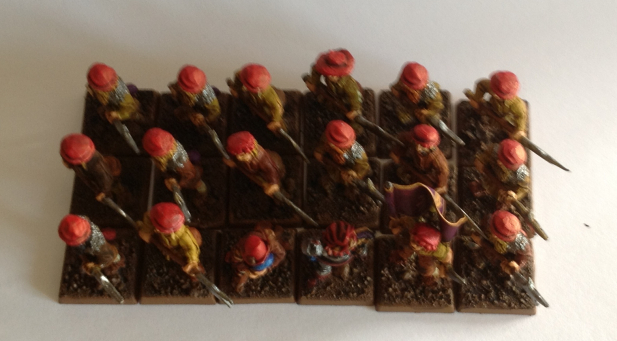 Apart from Gustave these figures are all Foundry reissues of old citadels, Gustave is an original. I went with the colour scheme shown in the colour, “plate” in Warhammer armies as the main halberd using figure is clearly portrayed, but for variation changed the colour of the smock on a number of the figures. I converted a number of the figures holding an ornate pitchfork in to halberds using weapons from Essex Miniatures and citadel that were available at the time these first came out. I also did some head swaps.

Apologies for a couple of the photos, I took them last night on the iPad, must locate the camera after the holiday! Only now at work do I see how blurry a couple are.
Posted by Erny at 04:51