OK I'll bite Orlygg, I'll design a warband for this summer but I'll leave it entirely to the whim of Chaos. I lie, you're doing Khorne so my  warband will be Slaanesh.

Here is what I rolled: 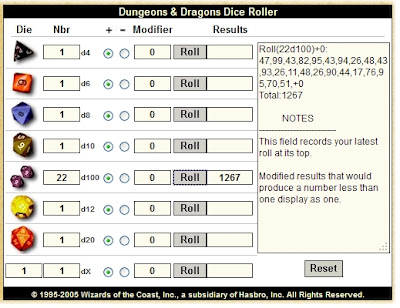 Starting character:
Race is 47 so human.
Profile is 99! so level 20 wizard.  Awesome, I'll try not to gloat, what the gods give they can take away on the next die roll.

Dedicating myself to Slaanesh I now take a +1 to WP as my gift. That level 20 is pretty powerful and I'm going the totally random route, I'll forgo the extra gift that orlygg suggests. 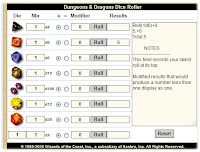 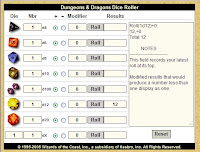 So we have a 5 followed by a 12, that makes my sorcerer half vampire. Awesome. There are five levels of vampire so either I randomize the level or decide to put the coolers on this rapidly over heating champion and just make him a level 5 vampire half breed.

I now need to combine his stats, add them together and divide by two rounding down to the nearest whole number or 0.5. Those 0.5s of a point are important as other rewards can add or remove 0.5 which can make a whole number. Until such a time the stats with a 0.5 in them are treated as rounded down to the nearest whole number. With Ld onwards the value can have a positive modifier, I've averaged that out too but always rounded down.

So I've gained in my physical stats but dropped a little in my mental stats and lost a magic level. Overall neutral perhaps. Now I should roll to see how the half breed looks but vampires and wizards look close enough, I'll just sort of work it out later.

Now for my retinue, here I'll follow Orlygg's suggestion because otherwise if I rolled say a d4 for rolls on the follower table I could end up with a very powerful warband. So 43 gives me d6 dark elves (appropriate) and 94 gives me a wizard, hell yes, an apprentice. Now I just need 2 more d6s. 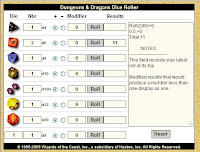 To give me six dark elves and a level 10 wizard apprentice.


So I have a sorcerer half vampire, with an apprentice and a body guard of six dark elves. I'm a bit lacking in troops here so I predict much summoning in my future, undead (well he is half vampire) and daemons!

He shall be called Dragan Dhampir, a murderous, "noble", from the boarder princes who found himself seeking ever darker secrets in a sensual lust for power over life itself. He's got his wish so far...
Posted by Erny at 07:48